Algeria, with the only requirement to enjoy

They were present in Spain 82, Mexico 86 and South Africa 2010 and they never passed the group stage. History seems to be repeated in Brazil 2014 because the mere fact of attending the event is already a prize for them. They got the ranking in one of the African play-offs and the last time they beat Burkina Faso the minimum with a goal by Bougherra.

Algerian football federation has carried out a project in France that has catapulted national team. In French territory we can find many Algerians and Algerian descent. Thanks to this phenomenal job of capturing federation these young Algerian roots with his team has grown considerably. As best example shown Brahimi cases or Feghouli.
With the arrival of Vahid Halilhodzic to bench "Desert Foxes" have acquired such regularity that before condemning them see the important tournaments from home. Even technically have also taken this small step forward that unlike other African teams.

Speed ​​and dribbling in the bands: Algeria is a team with too many shortcomings but the bands can boast quality, speed, dribbling and goal. Brahimi and Feghouli are the best they have and should play an important role in the team. His brash, brazenness and skill they can depend paste more than a scare to Belgium, Russia and South Korea.

defensive line: Since the arrival in 2011 Serbian Halilhodzic, the results came immediately and the team is incredibly serious in defense. A network built from a defensive highly reliable with players experience Lacen block, Yebda and Bougherra like banners.

Lack of goal: The Sporting Lisbon striker Islam Slimani is its clear reference in attack. This year alone has recorded 10 counting the goals 28 matches played with his club. However the selection is transformed radically and has scored 9 goals in just 14 internationals although there seems to be a natural goalscorer who frightens defenses contrasted.

Lack of quality: African team as good quality and pause absent. However within the African teams can be more technique that has. It belongs to the group of North African teams in which you can usually find something more than physical and speed. Morocco and Egypt is possibly the most technical of the continent, but neither of the above has been achieved to qualify for Brazil.

defense group: In the H group will find selections that base their game on the defensive solidity as they. Both Capello's Russia, such as South Korea are teams that do not lose their position easily, with a demanding effort and a lot of help on defense. The Desert Foxes have much trouble finding space against these teams. 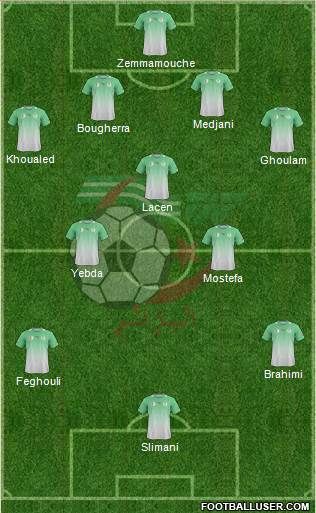 Coach:Serbian ex-coach of Dinamo Zagreb and Ivory Coast among many teams, He is a believer in defensive football and tactical rigor. Since taking the controls of the Algerian ship 2011 the team has achieved a regularity and reliability nonexistent before. In the last African Cup of Nations they did not go beyond the group stage, however it does not lack experience because it takes more than three decades dedicated to football.

First as a player he raised a glass of Yugoslavia and Ligue 1 in France. It defending the colors of their flag scored 8 goals in 15 matches. Coaching boasts a French Cup and other CAF Champions League. Wide connoisseur of all football, and inhabitant of many different corners of the planet has exercised its role in Europe, Asia and Africa. It is the "Zorro" of the "Desert Foxes".

-Champion of the African Cup of Nations 1990.
-Quarterfinals at the Olympic Games in Moscow 1980.
-Currently it ranks 25 FIFA ranking.