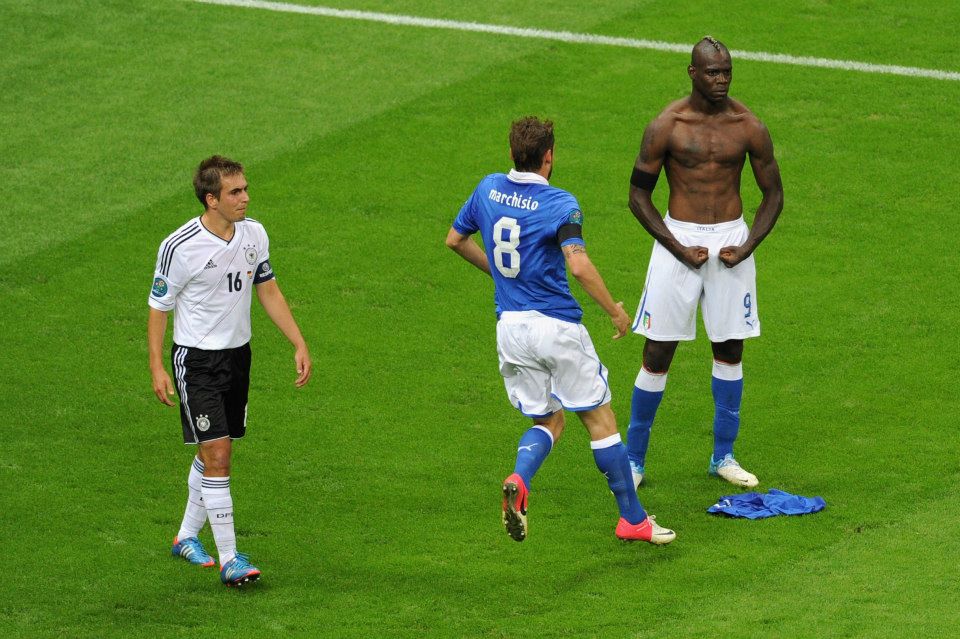 This celebration of Ballotelli in the Euro 2012 gave many memes.

Mario Ballotelli returns to Milan, but not to Inter, place where he grew up and trained as a footballer but the rival, to AC Milan. The eccentric, peculiar and controversial striker of just 22 years left Manchester City after two and a half seasons.

City paid Inter in 2010 near 28 million euros for his transfer. In this operation you will receive 20 millions more 3 in variables by its transfer, that will be paid in 5 annual fees of 4 millions. Meanwhile, Balotelli will undergo the medical examination today and then sign a contract for 4 seasons and a half, until June 2017. The wayward player will not be able to play the Champions League tie against Barcelona as he has already played this competition with City.

Ballotelli's time at Manchester City has been marred by his conflictive character, causing bizarre situations, the last after coming to blows with his coach Mancini in a training. Balotelli ha marcado 30 goals in 80 matches with the Manchester City jersey but also 22 yellow cards and 4 expulsions. Surely on his return to Italy he will not leave anyone indifferent.

Footballer dies in the Cup match in France
The average age of coaches who won the Champions League as debutants
Andrés Iniesta's farewell to Barca could be dated
Atletico lost his streak Coimbra
It ended the regular season in the League Two: Villarreal returns to First
The list of Del Bosque for Euro 2016, another controversy more
Pepe Castro spends ready with the theme Batshuayi and it explodes in his face
The ideal eleven Premier League with two Spanish
Barcelona and Madrid are tied by Messi and Ronaldo
The best images of the World: day 7