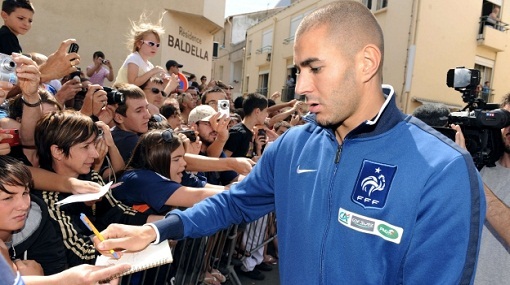 Karim Benzema, front 25 years of Real Madrid, He was caught at dawn 3 February by a radar M40 when circulated 216 mph in a limited stretch 100. A few hours earlier, the team coach Jose Mourinho had lost a league match in Granada, by an own goal by Cristiano Ronaldo (1-0). Car, an Audi that the French player leading up to the municipality of Pozuelo de Alarcón, It was photographed by a traffic camera. Police sources claim that, although that is the speed that is reflected, the real is superior at least one 5%.

The radar also detected, According to police sources, renting a Porsche in Madrid whose driver is unknown and at a higher speed: 260 kilometers per hour. None of the drivers, They are circulating almost on par, He was arrested because the Guardia Civil protocols are advised not to pursue vehicles traveling at such a high speed road safety issues. Thus persecution and consequent dangerous situations are avoided for other road users.

Porsche Club, according to the police, He circulated at par and 260 kilometers

Benzema was quoted on Tuesday to testify before the judge for a crime against road safety, as it exceeded by more than 80 kilometers per hour the speed limit at that point of the M-40, as it is a long distance route. If he had been caught in an urban road, the stop for the same offense would 60 kilometers above the speed limit. Finally the player, advised by lawyers of Real Madrid, He managed to delay the trial until a few weeks, with the excuse that the white team played around the semifinals of the Copa del Rey with Barcelona and was "a high-risk game", as he argued Madrid. Although he was summoned to the meeting cupbearer, Benzema did not play a single minute, As in the previous two games of Madrid, against Rayo Vallecano and Deportivo in La Liga. The last game that was played Benzema 13 February played in the first leg of the Champions League knockout against Manchester United, and he made headline. In Granada replacing Higuain came in the second half.

Real Madrid sources confirmed yesterday the facts, clarifying that Benzema himself who was "personally directed the magistrate to order the postponement of the trial given the importance of the party". Benzema followed a meeting from start to finish from the bench.

Like the Porsche photographed by radar, the vehicle traveling in the tip Lyon was renting and, According to police sources, he was accompanied by another person. According to the same sources, Audi "was running very close and a similar rate at the Porsche" (although in reality it was 40 kilometers per hour slower than the Porsche). Researchers say that this second car was also driven by another player, I have not been called to testify or appear in the crowded. In such cases, when you opt for not stopping some vehicles due to the danger posed, Civil Guard made the complaint after requiring the company renting the vehicle contract, in this case Real Madrid. It was the club itself that Benzema identified as the driver of the Audi, according to sources policiales-, whereas he chose not to with the Porsche and, so, assume directly sanction. Club sources, while recognizing the case of Benzema, unaware of the existence of another vehicle owned by Real Madrid involved, Porsche.

The striker faces a possible sentence of six months imprisonment
Benzema faces a possible prison sentence of three to six months, the hardest choice, or to a monetary fine of six to 12 months. That amount could go from 5 to the 400 euros a day, as decided by the judge according to the economic capacity of the offender: the front takes about five million net per year.

Another option would be the player shall work for the benefit of the community in a period that could go from 31 to the 90 days, according to the article 379.1 the Penal Code. What is certain is that Benzema will be prohibited from driving in a time span of up to four years. If the player pleads guilty, the judge will apply a reduction of his sentence, so it is estimated that it could again bring a car in about eight months.

Not the first time Benzema has problems with cars. In November 2009 He escaped unhurt from a crash early after stamping your vehicle, Audi Q7, against a tree in La Finca after a match against Barcelona that the Madrid team lost. Investigators determined that the car was about 40 kilometers per hour, but it suffered major damage. The 24 December of that year, The striker was also involved in a traffic accident Reunion Island when he was accompanied by his friend rapper Rohff in a sports. The car also suffered major damage.

"Cristiano Mendes offered me, I told him to leave me 250 millions"
The top five players in the Premier that end contract 2015
This will win the champion and runner-up of Copa Libertadores 2018
Calendars that handle the big leagues to finish the season
So the winter is 2017 in the league
Santi Cazorla, year and a half of fighting an injury that remains unresolved
They paid for it 72,5 million euros and made his debut with his name painted marker
Madrid-Barcelona in a hypothetical semifinals of Copa del Rey
Hull player Ryan Mason, in serious condition after head injury
La Liga, the sixth largest investor in league signings