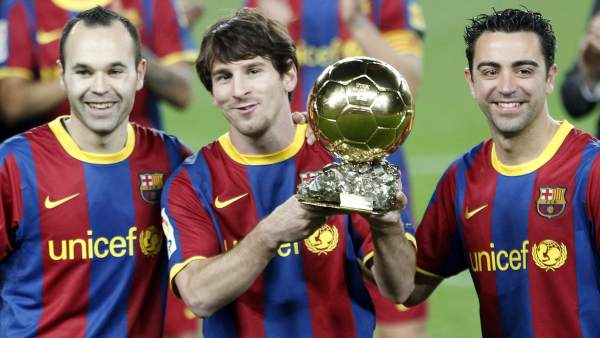 The Barca player, everything indicates that he will announce his departure to China soon, He has been recognized by many people in recent days after his last exhibition in the final of Copa del Rey against Sevilla in which his team thrashed 5-0 and he had a stellar performance with a goal included.

The prestigious magazine France Football’ with a publisher who signs his chief editor, Pascal Ferré, He has apologized to the manchego player after not having awarded the Golden Ball for all these years, especially in its edition 2010 The closer and possibly more as it deserved, among other things, he managed to score the goal that gave Spain the World Cup against the Netherlands in South Africa.

In that year 2010, Iniesta was second behind Leo Messi and ahead of Xavi Hernandez FC Barcelona player also. Many are those who think that this season was the clear Fuentealbilla awarded the prestigious award but eventually the votes of captains and coaches decided the balance for Argentina.

Now, 'France Football', in the editorial cited, Iniesta reward does not rule out the prize depending on what the role of Iniesta and the Spanish national team in the World Cup of Russia 2018.

Skrtel loses consciousness in the party and his partner saves him
Aubameyang will be trained by his father in the selection
River new champion of the Copa Libertadores
Almería 3 Girona 0: First Almeria again
Parma, How the Serie D to Serie A in three years?
The most expensive players of Euro 2016
The amazing reason why a Chinese player has been expelled from the team for a year
The son of a former star of Barca debut with absolute Holland at the same age
Bundesliga gives his Best XI
Marco Pappa finds in the middle of a party of the death of his mother