La Champions League, the dream of any footballer

The Champions League is here another year. The 32 best teams in Europe again to challenge the world's best club competition, which will lead to the end of the next 25 May at Wembley Cathedral.

It will be an exciting season with many questions. The first know if Chelsea with a new team is able to return to reedit the title won against all odds last season. 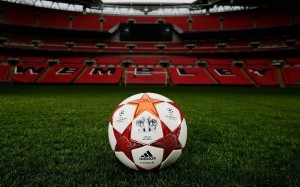 The next question is to know what the role of the two favorites: Real Madrid and Barcelona. After the semifinals last year, whites have no choice but to return to a European Cup final they already resists since encumbrará Zidane to Madrid at the far end of Glasgow. For Barcelona, instead, it will be time to know whether the project “Tito vilanova” It is strong enough to lift the European Cup fifth club history, and the third in his talisman stadium: Wembley.

Of the other favorites we should highlight the return of a classic European elite: Juventus, returning after finishing last season as champion of Serie A, and also unbeaten. Bayern seek revenge after the fiasco of the final pass, where he was surprised at home by Chelsea.

El Manchester United, and its neighbors in the City will be the other big favorites in a tournament that has more open than ever.

For all, it repeats the format of past seasons: 32 divided into eight groups of four teams (exist 8 seeded and teams from the same country can not face). The first two are classified to second round, where the first crossing of a second group against other, without continuing to come up against teams from the same nation. From rooms, free giveaway you just matching teams to an end on neutral ground.

Each participating club in the group stage of the Champions League enters 7,2 million euros for the mere fact of participating. A separate amount the results obtained and is equal for all contestants.
Those who qualify for the second round will have an extra 3 millions of euros; 3,3 million euros if they pass the quarter-finals; 4,2 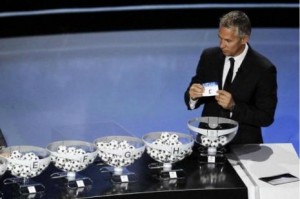 million euros for participants in semifinals; 5,6 million euros for the runner-up and 9 'Kilos' for the winner.
further, every victory is paid 800.000 euros, while a draw are 400.000 admitted euros.
As for TV rights is 341,1 millions of euros, which is divided by country and values. A) Yes, each country has a total allocated amount of television rights and it is divided between its representatives. further, clubs will have extra income based on third countries purchased exclusively relaying meet.

Group A: Composed Porto, Dynamo Kiev, Paris Saint-Germain and Dinamo Zagreb. Very hard, four rocky teams without theoretical perita sweet. Favorites Gauls, after a summer of signings. Ukrainians, Very safe at home, can be the surprise against a Porto greatly weakened with the departure of Hulk.

B Group: Arsenal, Schalke 04, Olympiakos y Montpelllier. Englishmen are the clear favorites to go from first group. Any other result would be a major surprise. Second place looks very open, with a slight advantage for the Germans. But beware the Greek hell, where few earn. del Montpellier, very touched at the start of the Ligue 1, It is best to see the return of his field Giroud.

Group C: AC Milan, Zenit St. Petersburg, Anderlecht and Malaga. No favorites. Milan goes from bad to worse in the league and casualties Cassano, Ibrahimovic and Thiago Silva have done much harm. Zenit is booming after the signing of Hulk. Malaga may be the great unknown, what role can give the surprise team. Saviola, Joachim and well known company Champions. 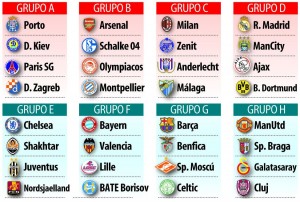 group D: Real Madrid, Manchester City, Borussia Dortmund y Ajax. What god hand out lucky!. Four league champions facing. Possibly, the toughest group in the history of the Champions. The Madrid side with a slight advantage, but beware, Trust no one. City should go second, but he must strive a great time against Dortmund.

group E: Chelsea, Shakhtar, Juventus and Nordsjaelland. English and Italian must confirm forecasts. The Donestk should settle for Europa League. The Danish, enjoy the show.

Grupo F: Bayern Munich, Valencia, Lille and BATE Borisov. Germans are clear favorites for players and awards. Valencia is the part more options to be third at the expense of Lille without Hazard.

Grupo G: Barcelona, Benfica, Celtic and Spartak Moscow. The Catalans are the clear favorites. If everything goes fine, in the fourth round and will be classified. Benfica should exceed Scots and Russians.

group H: Manchester United, Sporting Braga, Galatasaray and Cluj. The “red devils” They are unquestionably the best in the group on paper. The second very open space with possibilities for the three.