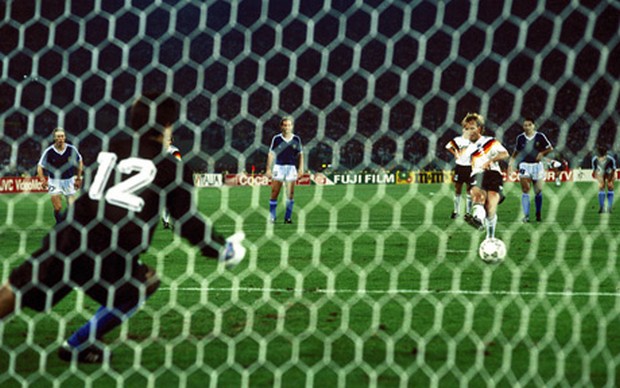 For many analysts international football, World Italy 90 It is considered the worst in history. few goals (115, what is the average worst ever), thick game most football powers and primacy of the defenses of the attacks marked an issue that for many was a step back in the evolution of football. And it probably was carefully analyzed if everything was the second world championship in transalpine lands after the 1934.

They involved a total of 24 Selections low as illustrious as those of France (No priest Cantona), Denmark (los Laudrup), Portugal (Futre among others) or Mexico, disqualified for forging a sub championship 20 the passport of some of his players. Low offset that in the presence of Netherlands (absent from 1978), Costa Rica, Egypt and the United States to form a total of six groups of four teams each.

A strange world and from the start, where was the surprise Cameroon in the opening match beating Maradona's Argentina 0-1, also he saw falling lost goalkeeper Nery Pumpido for the rest of the championship replacing him Sergio Goycochea, in the end of one of the major players in the tournament.

A World that left a relatively quiet first phase, the classification of all the great powers (some with more troubles than others as Argentina won only one match), Ireland qualifying without winning a single match and Michel (hat trick against Korea and goal against Belgium) y Toto Schillaci (convened by surprise by Italy last minute) as best players in this first phase.

Michel was the star of a selection based on the Quinta del Vulture.

Of course, if quiet was the first stage we can not say the same from the eighth, they had some exciting duels. Definitely, the star crash was the Argentina-Brazil, played in Turin ended Argentine win thanks to a goal of Caniggia after good Maradona. Whatever the outcome and the elimination of one of the worst Brazilian selections are remembered (despite having Romario, Bebeto, Aldair the Taffarel, among other figures), The meeting will be remembered for the controversy years later about a possible sedative water that served to knock out some Brazilian players at halftime. 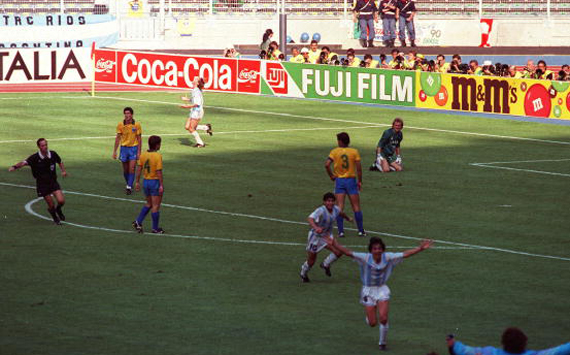 Cannigia's goal gave the victory to the Argentinians on Brazilian.

It was the only Brazil-Argentina, the only exciting duel of eighth. Spain were eliminated in extra time against Yugoslavia thanks to a goal from lack of Stojković. Cameroon won 2-1 to Colombia after the well-known Colombian goalkeeper Rene Higuita loses the ball while trying to dribble past Robert Milla outside your area and see the Cameroonian took away the leather and transform a goal that besides meaning into the quarter became the both scored by a player on a veteran's World (38 years and 20 days). 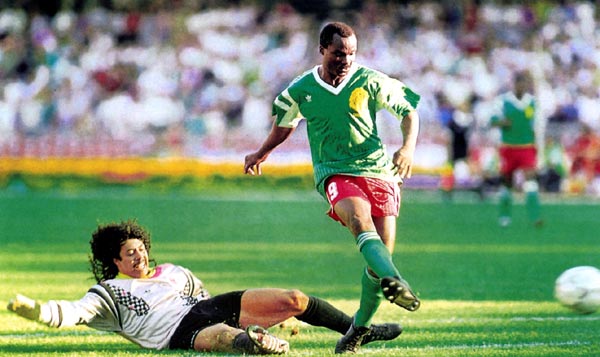 Definitely, If the second round were exciting, no less than they would be rooms. Especially, two games. Yugoslavia-Argentina, I was going to be won on penalties by the South Americans despite a failure in the penalty Maradona, and England-Cameroon, settled in extra time with a goal from Lineker who served to keep out the African box, first team from the continent that had reached such instance.

If something marred the World Cup in Italy, were their semifinals, determined both on penalties after two draws to 1. Matthäus Germany, Brehme, Klinsmann, Kholer and company would win in England in the maximum penalties starting the English a terrible streak with penalty shoot-outs that would cost more than a few deletions in the future.

Naples, San Paolo rendered with Maradona, Argentina was going to knock out Italy in a thrilling penalty shootout where Diego if he would score this time and where Sergio Goycochea would become a hero to make two stops that were worth a final.
How could it be otherwise, this end would be marked by two factors had been present throughout the World: the penalty and few goals. It was like this, as Andreas Brehme with five minutes remaining would realize a controversial launch from the spot that would serve to give Germany their third and so far last title and avenge the affront step 1986 before Argentine. 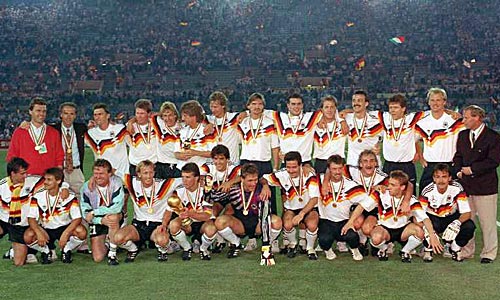 Germany won the World 1990 with a very competitive squad.

The culmination of a World Cup game with little, with few figures and Germany Champion. There is a saying among the Dutch fans who say that the poor always winning tournaments by Germany. This time, This happened.

Hereford feat 1972, when football was still romanticism
Five amazing stories of World Cup history
The story of Pickles, World Cup hero 1966
Paco Liaño, the best "Zamora" history
Toni Jimenez gave a goal to parakeets
The final of the FA Cup 1989, la de Ian Rush
Ruy Ramos, one of the pioneers of professional football in Japan
The biggest win in the history of the League
Godfrey Chitalu: The unknown scorer
Klaus "Create" Urbanczyk, a hero of before