Michu, the new sensation of the Premier League

Who would tell Miguel Fernandez Cuesta, a boy born in Oviedo ago 26 years would become the sensation of the 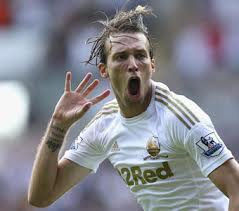 Premier League at the start of this season. And is that if you do not know, the man who responds to the name referred to above is none other than Michu, Spanish midfielder signed this summer by Swansea City Michael Laudrup coaching.

Michu, former player of the Oviedo, Celta Vigo and Rayo Vallecano, and he scored last season 15 goals in Primera Division with equipment rayista, what he did to be the highest scoring midfielder category, and which earned him his move to the Welsh team playing in the Premier League. There, Spanish player, It has been uncovered as one of the sensations of the Premier League and leads the scoring charts with four goals in three games, two of them, in the doublet signed in the first game against QPR. Thanks to that, your computer is located at the top of the table, It is so far the surprise team of England.