strong emotions and heat, very hot in Orriols. Real Sociedad arrived at the Granota stadium in a match where three important points were played. The match began with a clear chance that Barkero was unable to touch a perfect serve from Juanfran's wing with his foot. JIM came out with several variations regarding the UEFA match against Helsingborg, starting the youth squad Rubén García leaving out the three forwards of the squad, one of them, el griego Gekas, outside the call.

The game went the same way as against Espanyol, with a Real Sociedad that commanded the field and Levante at the mercy of its rival. Zurutuza was going to score with a strong shot from outside the area that after hitting the post, he was going to beat the Uruguayan Munua. 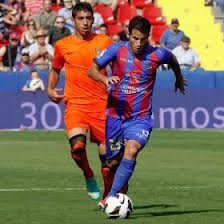 Things were not going to change too much until the end of the first part, except for a shot by Juanlu that Claudio Bravo was going to stop and another chance by Carlos Vela that Munua was going to send to a corner. On the break, JIM was going to make a decisive variation, Iborra remained on the bench after suffering severe fainting due to the heat and Levante's star signing Obafemi Martins was going to take the field, Levante's new reference man, the replacement for Felipe Caicedo and Aruna Kone.

The Nigerian was going to score three goals, although two were going to be annulled for offside. The game was going along the same lines when JIM was going to introduce Michel, a player with a lot of talent who was going to be decisive again. Real Sociedad was also going to make a change that showed the intentions of the San Sebastian team, introducing Chori Castro.

Under the baton of Michel and Barkero, Levante was going to take over the game, with a game open to the bands and with a Nabil El Zhar who was going to overwhelm De la Bella, side of the Royal Society. 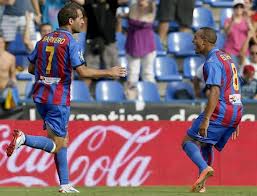 His was going to be the play that Martins was going to finish offside somewhat rigorously and precisely a penalty on himself El Zhar was going to allow Barkero to score the tie at one.

Real Sociedad was going to try to keep the tie by playing the ball but they did not expect Levante to have their secret weapon every year, first it was Caicedo then Kone and now it is the turn of Obafemi Martins. Recovery of 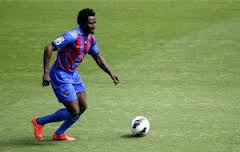 Ballesteros, long pass and Martins was going to win a ball on the run, stop in a meter to leave the defender looking and mark Claudio Bravo. goal, Infinite joy in the City of Valencia and its already famous post-goal volley, to the delight of the fans granotas. In the end, Levante added three new and long-suffering points in their stadium against a tough rival. As a negative note to highlight, the sad passing of a fan 82 years due to a heart attack, that tarnishes the joy for the granota fans.