Pele was, It is and will be the king of football forever and ever 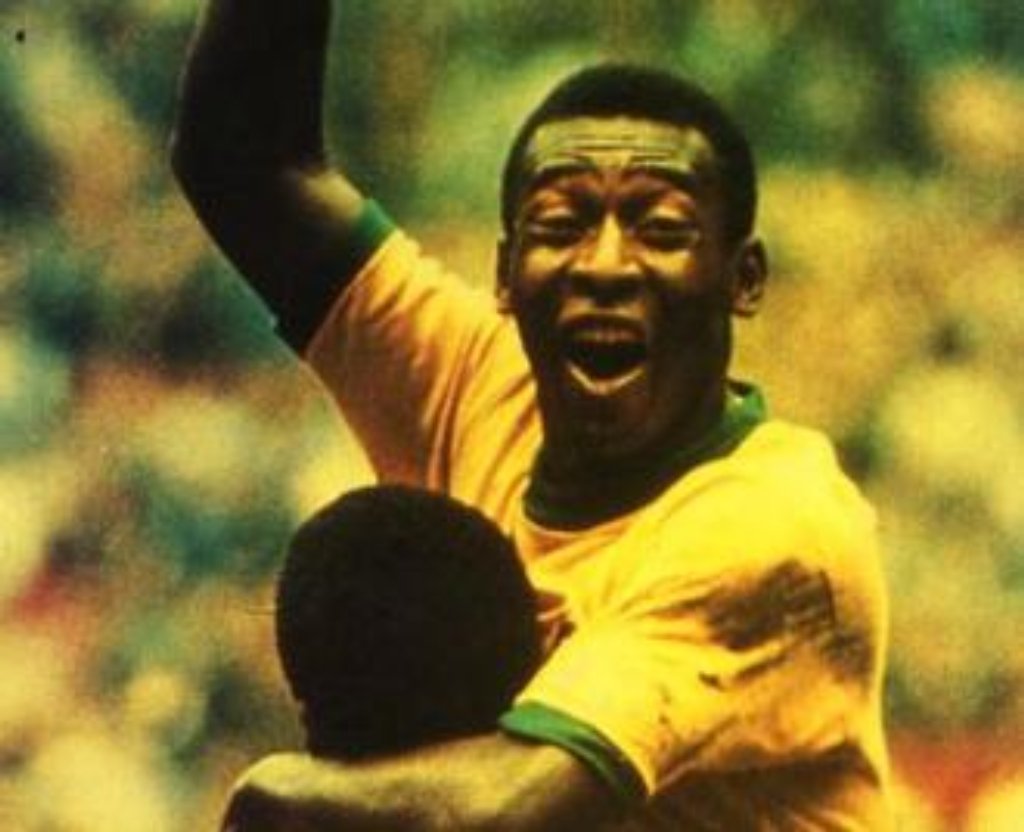 Is Pelé the best player in football history? 1284 goals along cu career, 3 world, 12 goals in World Cup finals, 95 so many with the shirt of the Brazilian team, record for goals in a match of clubs 8, or more of 127 many in just one campaign. These are some of the majestic king of football figures, Edson Arantes do Nascimento, better known popularly as Skin.

Skin, the king of football

born 23 October 1940, when you talk about O Rei Skin it must be done in capital letters, because we are talking about one of the greatest players who have been on a field, but most. physical deployment, Technical pouring, voracious goalscoring ability and an impressive sporting longevity are some of the characteristics of a player who marked a before and after in football.

Father son footballer (Dondinho) and antifutbolera mother, the beginnings of Skin with the ball in his childhood they were divided between a shoe factory and a futsal team, el Radium, where O Rei was acquiring technical and footballing skills that would serve him shortly afterwards to show them on the lawn. School also, where a fellow would take him the nickname Pele because of the confusion that O Rei used to do with the name of Vasco de Gama goalkeeper Bile called and he called Pile.

His first glimmers with football would take place with Baquinho, a team where his father played and was trained by former Brazilian international Waldemar de Brito, that would be the man to convince Pele's mother was dedicated to this football, After staying with the game I bowled future promise.

His good role in local championships which protruded from the other guys gave him that Brito will take him to the ranks of Santos. A couple of years Pele took the first team, long enough to demonstrate that only 15 years could be at the level of the best Brazilian players. It was like this, as a 7 September 1956 officially debuted at the Cubatao, also scoring a goal.

A perfect springboard for what would be the first steps of Pele in the team. In his first year as a professional, Rei sign or a simply spectacular data: 36 goals in 29 parties that helped him to be the top scorer in the Paulista championship. further, He got a milestone in the history of the country: being the youngest player to debut with the selection. I would, how could it be otherwise in Maracana, a 7 June 1957, in a match that Brazil would lose 1-2 with Argentina but where Pele managed to debut as an international goalscorer. With only 16 years, O Rei was already a benchmark for canarinha.

His spectacular rise to footballing country summits, together with his great charisma, Pelé was finally summoned for the Sweden World Cup 58, where I am replacing Luizinho, the star of the moment Corinthians, which it generated a huge social debate.

Renqueante by injury in a friendly, Swedish World Cup was the great international showcase for Pele. In the Scandinavian country, the 10 Brazil went up to the altar of football. Despite not playing the first two games with a knee injury, Pele made his debut in the third match against the USSR, And he did it in a big way, with his team's victory. But nevertheless, it was not until the quarterfinals when really the monstrosity of this genius would.

Wales on the horizon, a splendid his goal gave the victory to Brazil and the semi-finals. France Kopa and Fontaine was the next challenge and 10 Brazil showed all their might: lethal hat trick against the Gauls in Brazil's thrashing by 5-2, which he led to the second end of the story for Brazil.

In the end, Skin he would rise to the top in a new double that would lead Brazil to win its first World Cup by defeating Sweden by 5-2. With only 17, O Rei became the youngest player to lift the world title.

The man of records

That same year 58, the Brazilian star would get another inhumane record: the number of 58 goals in 38 league matches. A Stratospheric data that would lead him to be proclaimed again top scorer and champion Sao Paulo state championship for the first time in his career.

The following year would be the most forwarded attested path Pele. His reputation as a good player did not excuse him from military service, which she led him to play in several teams Brazilian army barracks, in addition to Santos. A) Yes, not strange to see the Brazilian star play two games in less than 24 hours. Despite the difficulties, he did not fail his Santos teammates and led them to conquer the Rio-Sao Paulo tournament with again inhuman records.

The following seasons followed the path of the above, with an O'Rei already consolidated as a great star of South American soccer. his charisma, physical delivery, and talent and imagination led him to lift three Paulistas championships and numerous personal records. further, He managed to leave for posterity an authentic goal against Fluminense at Maracana, considered the most beautiful goal in football history and is remembered by a plaque honoring the beautiful both. In this action, called the goal Plate, Pele is left on the road to seven opponents before scoring on both.

That was how I came to World Chile 62, where Skin was going to get his second world title. But nevertheless, Brazilian striker injury in the second game against Czechoslovakia from playing more than just two games in the tournament.

Recovered from injury, the end of the year 10 Brazilian was outstanding, managing to win the Copa Libertadores for the first time with two of his goals in the playoff game of the final played in Buenos Aires before Peñarol. Thereto, he added the Intercontinental Cup against Benfica achieved, where Pele made one of the biggest footballing exhibits that are remembered in football history. Against Benfica Eusebio, manage to score four goals in the Estadio da Luz to give the Brazilian team its first Intercontinental.

So was the success and stir of the deeds of Skin that many European teams fought to have him in their ranks at any cost. But nevertheless, the Brazilian government made a decree that considered “National Treasure” prohibiting any output Brazilian league.

1963 Y 1964 would be the years of legendary Brazilian striker zenit. Although the labels were increasingly Ferrous about her figure, This did not prevent it be awarded a new Intercontinental Cup against Boca Juniors (with his goal in the Bombonera) and a new Intercontinental before the mighty Milan. This last year 64, they would see two curious facts in O'Rei's career: his debut as goalkeeper in a match against Gremio goalkeeper Gilmar injury, and the eight goals scored in one game in the rout of Santos 11-0 against Botafogo (figure ever achieved by anyone).

In 1966, would possibly have his only mole at a sporting level. England hosted the World after several attempts to take care of him. In the home of football, or the Brazilian national team and Pele were at the expected height and were eliminated by Portugal of Eusebio, with a hard football and unceremoniously sent home for Brazilians. That deletion and failure to have gotten never win a Copa America were probably the two great disappointments of Pelé throughout his long career.

That disappointment made him leave the Brazil a couple of years and focus on Santos, with whom he won 3 Paulistas more championships and a reputation for genuine world star. Famous were his tours in Europe and Africa (to the point of ceasing a fire in a war to see him play in Laos) where his Santos fell in love with all ball lovers. 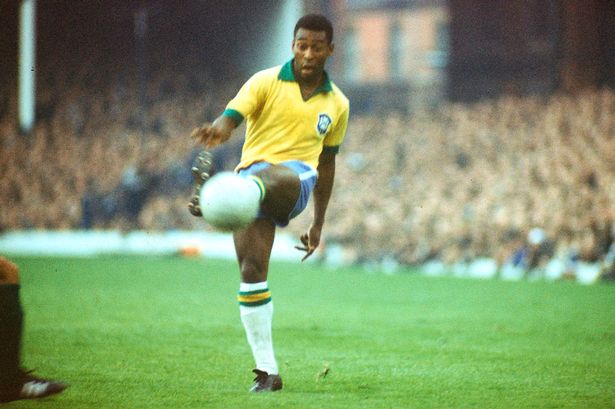 Mexico 1970, its finishing touch and its third world title of four

In 1969, Skin managed to write down the number 1000 of his career at the Maracana in a match against Vasco de Gama after scoring a goal from a penalty. One more to add to a collection that was missing the icing: World tricampeonato achieved in 1970.

This time, Brazil had formed a great team with Tostao, Gershon, Jairzinho, Rivelino Pele. All under the baton of “Lobo” Zagallo impressed the world with an incredible world, where they won all his matches loosely. fast football, pass and continuous movement where Pele excelled like no one has ever done.

Despite scoring only four goals in the tournament, the Brazilian left behind for his memory such spectacular plays as the midfield shot to Czechoslovakia in the first phase or the “famous in Pele's goal“, that no ball past Uruguayan goalkeeper who ended the launch off the sticks. The victory in the final against Italy 4-1 (with a goal of King) He symbolized the perfect football player 10. It was the beginning of the end for a player who has just entered the legend by getting his third world.

Years 70 They were Pele's farewell. The 18 July 1971 definitively dismissed from the team in a friendly against Yugoslavia that ended tied at 2. With 77 goals left the “canarinha” being the top scorer in the history of selection. In 1974, O Rei was withdrawing from Santos, Tired of professional football after more than 18 years at the highest level.

He was the star of that galactic-ridden New York Cosmos

But nevertheless, economic problems that brought him to the brink of bankruptcy would make him return a year later to New York Cosmos of the then NASL, where he would offer some unforgettable moments in a team that brought together first galactics in history, long before that Real Madrid of the beginning of the 21st century. There next to Beckenbauer, Chinaglia Y Charles Albert among others, Skin would sign the epilogue of a player who would definitely hang his boots on 1 October 1977, in a tribute match between Cosmos, and Santos played where each part with a different shirt. How could it be otherwise, framework, even if his beloved Santos.

It was the end of path of one of the great legends of football universal.