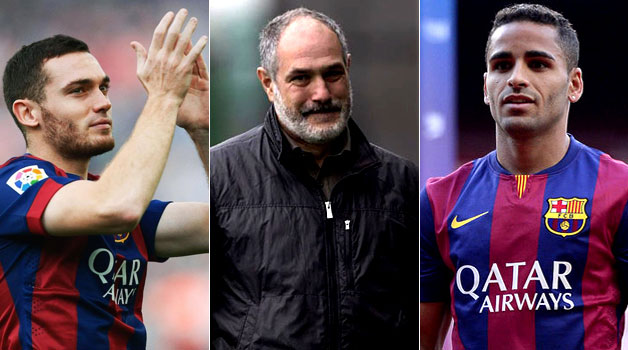 Vermaelen, Zubizarreta and Douglas. Will you continue next summer in Barcelona?

It is often said that to succeed, Aside from having luck and qualities, It must be in the right place at the right time. This could be applied to players in the following article, players who won many titles without playing practically nothing. Sure there are hundreds of cases, I remember a few of them.

Douglas y Vermaelen: They are the latest. Brazilian and Belgian, They have hardly played for one reason or another with the zamarra but both joined Barca 7 titles like culés. A very enviable professional palmares if we consider that Douglas played 380 minutes in two seasons at Barcelona and Vermaelen 598.

José Manuel Pinto: It was the eternal substitute Valdes at Barca for 8 years in which he played just 90 parties and added 16 Titles. Certainly a glorious stage for a player who played very little in the Barcelona.

Javier Portillo: his career at Real Madrid started like a shot. But nevertheless, it was diluted to the point of going through several teams and finish on the Hercules where he married the daughter of the owner, something that did not help him face the fans alicantina. Juice 59 parties in 4 seasons at Real Madrid and won 5 titles like Real Madrid.

Santi Ezquerro: juice 3 years in Barcelona where he lived a residual role as few minutes playing games and going in many as a substitute. In this period he won 5 Titles.

Mark Schwarzer: Australia won two Premier League titles 2015 Y 2016 without playing a single minute in both Chelsea and the surprising Leicester City. But he was there, bicampeón.

Bundesliga top scorer with just 81 minutes played
The best and worst of the Serie A: Season review 2013-14
Market players transfer 2015/16
Spanish cities with two or more professional teams
The top scorers in the history of Real Madrid and Barcelona
outstanding players of the first day of the World
How is football in Cape Verde?
Paco Jemez and the Mexican press are already known
the worst game in the world is played
Five players who beat cancer and returned to football