The five best coaches in the history of Atletico Madrid 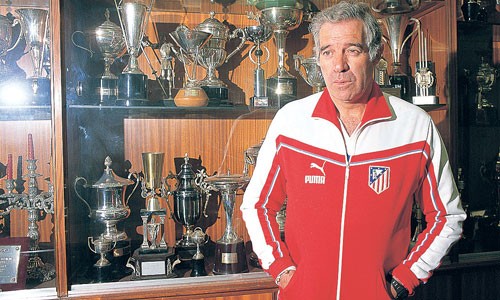 Luis Aragonés's Spanish football history. For many, the father of world champion Spain. Also a man of great character who got into countless battles Photo: Youtube

The Wise directed a total of 15 seasons the mattress in several different stages, In the first one, He passed almost directly from the lawn to the bench. A legend in the red and white house as both player and coach. as a coach: 1 League, 3 Copas, 1 and Supercopa 1 ascent.

Another coach who is poised to be a legend Atletico Madrid if it is no longer. Atletico defended the shield box in bad and good times and doublet that 1996, in several stages as Atletico.

coaching, He came in 2011 with the club near the descent and did that same season champion of the Europa League and failed to qualify as fifth in the league. Since then all hits. His record as mister Atletico so far has 1 Europa League, 1 European Super Cup, 1 Copa del Rey, 1 League, 1 Spain Super Cup and two Champions League finals.

Serbia joined Atletico in 1995 when the mattress set was far from being a powerful team after two previous seasons the razor's edge near the descent. Under his baton, Atletico reached recalled two of the season 1995-96.

It was also at two different stages on the bench while the second was far more bitter than the first being the coach drop 2000. His record at Atletico: 1 league and 1 Cup.

H.H was one of the greats of the sport and one of the most controversial technical history. Some of his sentences, They were engraved with fire in the books of the sport. Much as his “çatennacio” which she led him to win titles almost everywhere where he was. During his time at Atletico he won four years 2 leagues and 1 Copa Eva Duarte.

Also known as Mr Latigo, Vienna-born coach was only two years on the bench Atletico (1971-73) and won 1 league and 1 Cup. Effectiveness above all.

-The 10 best players from Atletico Madrid

-The five best goalkeepers in the history of Atletico Madrid

-The best anecdotes Luis Aragones, the Sage of Hortaleza

-The worst signings in the history of Atletico Madrid

And one more time, the curse of the Confederations Cup meet again
Parents and children who played World (part I)
The best interests of Spain
The best football ads
Joao Maleck, Mexico's bloody Franco-Cameroonian who wants to play with the 'Tri'
Gigi Riva, the god of Cagliari is still the top scorer of the Italian national team
The most curious anecdotes of the history of football
Ten curiosities of the history of the Spanish League (III)
The most valuable teams of America
The brutal numbers André Pierre Gignac in Mexican soccer