A party that changed the name of CSKA and Levski Sofia

Blue against Red. The sporting rivalry carried the most exaggerated limits. The result, conflict, mess, controversy, battle and how to use synonyms deemed appropriate. That's what happened one 19 June 1985 one of the most vibrant derbies that can live on the planet: the eternal derby Bulgaria Levski Sofia measured against CSKA Sofia in the Bulgarian Cup final country. 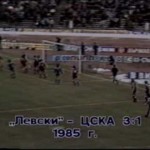 Two teams faced since since shortly after the end of World War II. El Levski, created in 1914 It was and is one of the most successful national history (26 leagues and 25 Copas) and certainly the village team founded by a group of students who paid homage with this name to General Vasil Levski, the man who made possible the creation of a new nation under the force of the Ottoman Empire. CSKA, the whole army, the club created upon completion of second world war (31 leagues and 19 Copas) He is representing that team triumphing newly minted its own merits and not as own (I could call up any player to be Army) go quickly to prominence removing Levski.

With Vasil Levski National stadium packed to the rafters, onces both came to the Cup as if life were they in them. They had outstanding bills, and both wanted to make clear that coveted winning the title against all. The result was a rough match, hard, with a multitude of violent entries that ended in a tremendous battle and victory for CSKA 2-1.

Although perhaps less off the result. Rather the complete opposite, because the party unleashed an external image the country so horrendous 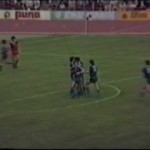 the Communist Party decided by decree dissolving both teams ( CSKA had to be refounded under the name Sredets and Vitosha Levski like) and condemn in perpetuity six players (including emerging figures as Lubo Penev, Hristo Stoichkov o Borislav Mikhailov). Finally, the sanction was revoked after one year and all returned to play.

After the fall of the Berlin Wall and the collapse of Communism both sets recuperon their names, but they will fail to never forget what happened that 19 June 1985.