Brazuca ball will be the World Cup Brazil 2014

Adidas has not released the ball with which the next World Cup in Brazil will be played, but it is already known with maximum certainty what it will be called and how it will be.. The name chosen by a majority of popular votes will be “Brazilian”, a colloquial name used by Brazilian citizens.

The ball will be white with black touches, red, green and blue and will allow you to collect all the effects of the free kick takers and long distance shots. Difficult to stop for goalkeepers, It is designed to reward cheerful and offensive play and shoot the number of goals. Thus, follow the example of the previous Jabulani.

The evolution of the World Cup balls has changed a lot in these 83 years of World Cup history. From those hard balls in which hitting the ball was almost an odyssey, it has moved to a dynamic where kicking the course has become an exercise in touch and softness. And if they don't look, the evolution of the different World Cup balls from the famous Etruscan to the now forgotten Fevernova. The list is not wasted, starting with Uruguay 1930:

These were the two leather balls used for the final. The one on the left corresponds to the one used by Argentina. The right one, Model T is the one used by most teams, among them, Argentina. And it is that the rivalry between both teams was such that each one chose a different leather to destabilize the rival.

The Federale model was the leather ball used to play the World 1934, Italy nationalized a championship where five South Americans to strengthen the team and win the cup on the right. 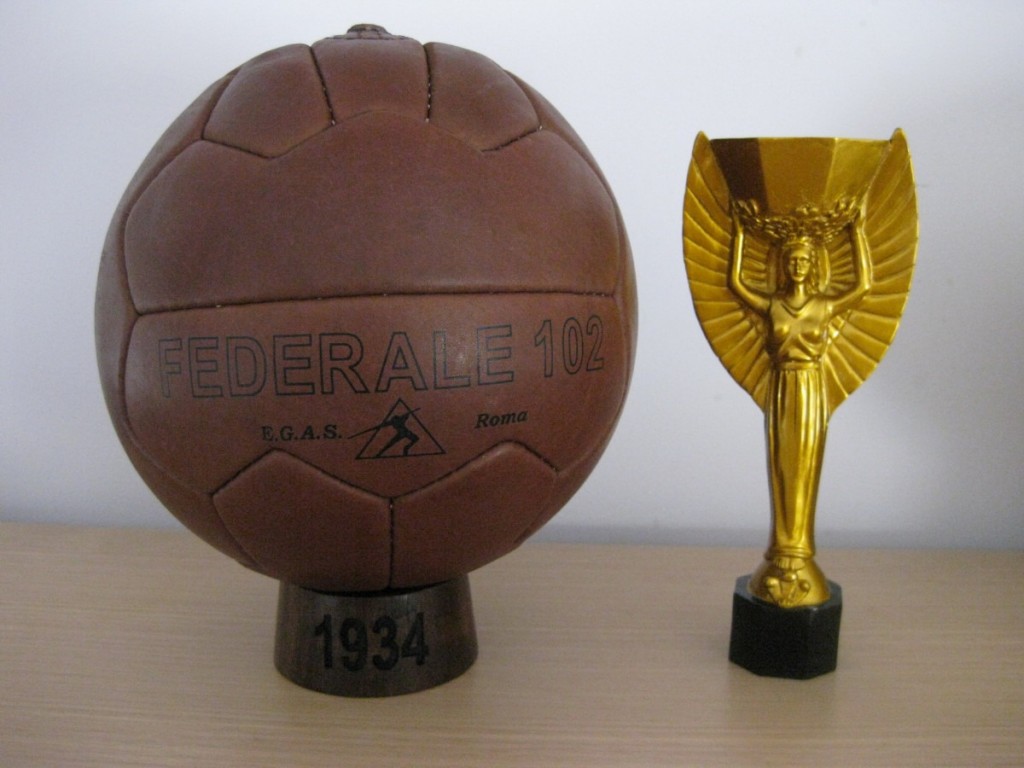 The first balloon with an Argentine invention valve was used. further, it was the first World Cup where players wore numbers on their jerseys. 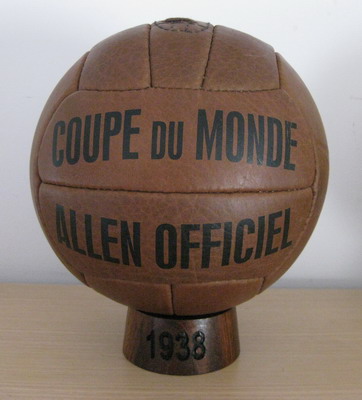 tiento the ball was used in World 1950. a Europe, already it is beginning to experiment with plastic balls. 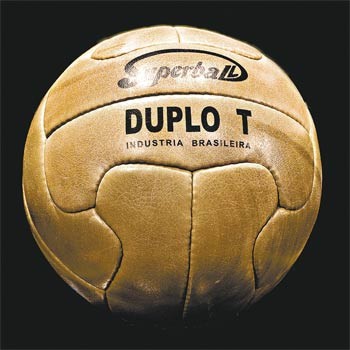 The World Cup ball 1954 It was yellow and had the Swiss flag logo.

In the world Cup 58, balls was brown or yellow. In meetings rain, used color was yellow.

Crack was the ball used in the World Cup 62. It had been used for 18 years in the Chilean national championship. Problems with pressure and unstitching meant that in some matches it was replaced by more consistent ones. 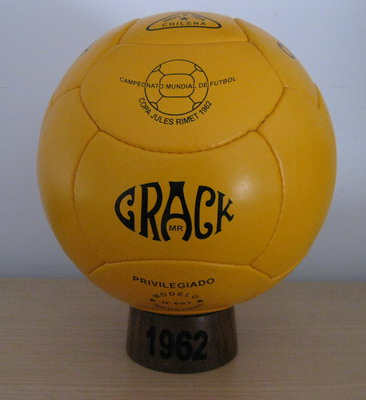 The Challenge ball was the official ball of the World Cup 1966. There were three models: in white, Orange and yellow, being the second the most used. It was the last World Cup without using the Adidas brand. The rectangular orange segments are back, yellow and white; they were manufactured 300 footballs for the World Cup and it was a bestseller. 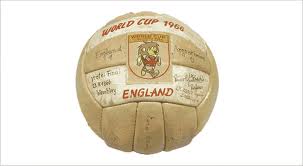 Leather and with 32 hand-sewn black and white polygonal segments, set the model for today's balls and marked the beginning of modern football, for calling it somehow, in terms of materials used. further, it was the first ball manufactured by a commercial brand (Adidas), exclusive supplier to the World Cup, that has continued as a supplier in all editions to date. 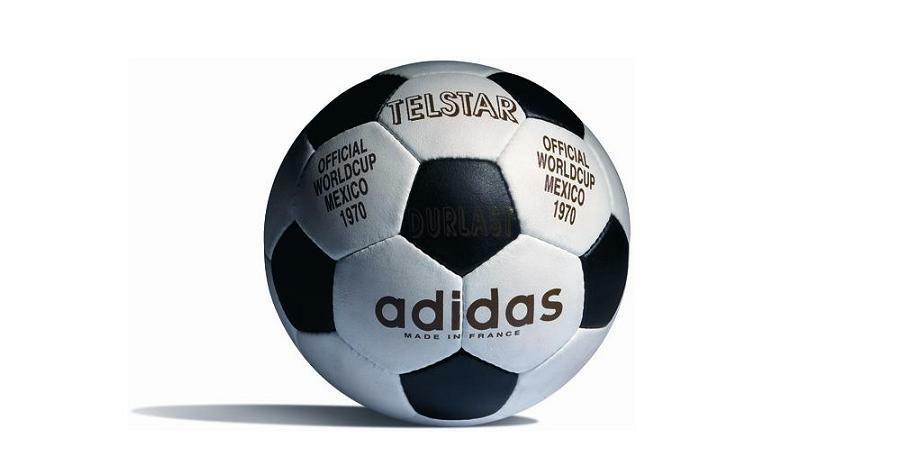 For the first time the model of the previous championship was copied. For it, kept the shape and aesthetics and only changed the color of the printed letters from gold to black. The hexagons were still white and the pentagons, blacks 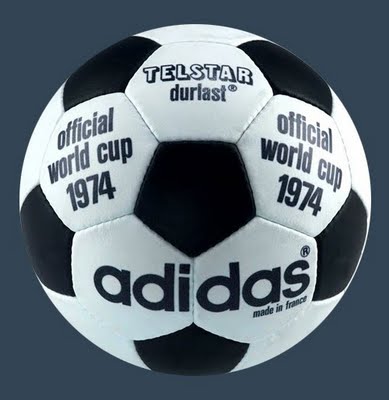 In 1978, football design underwent a new revolution with the presentation of Tango in obvious allusion to Argentine popular music. The twenty pieces with 'triads’ created the optical illusion that there was 12 identical circles. 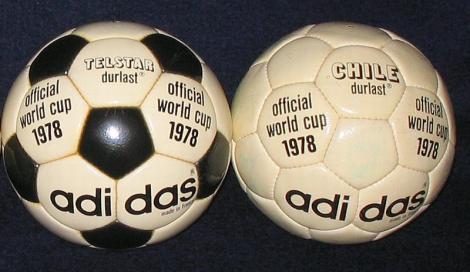 The initial design of the Tango de 1978 only slightly altered in 1982, although Tango Spain had a very important technological innovation. It was still made of leather, but featured revolutionary waterproof seams, which considerably reduced the absorption of water and, so, minimized the weight gain of the ball during the game in the event of rain. Definitely, a revolutionary model. 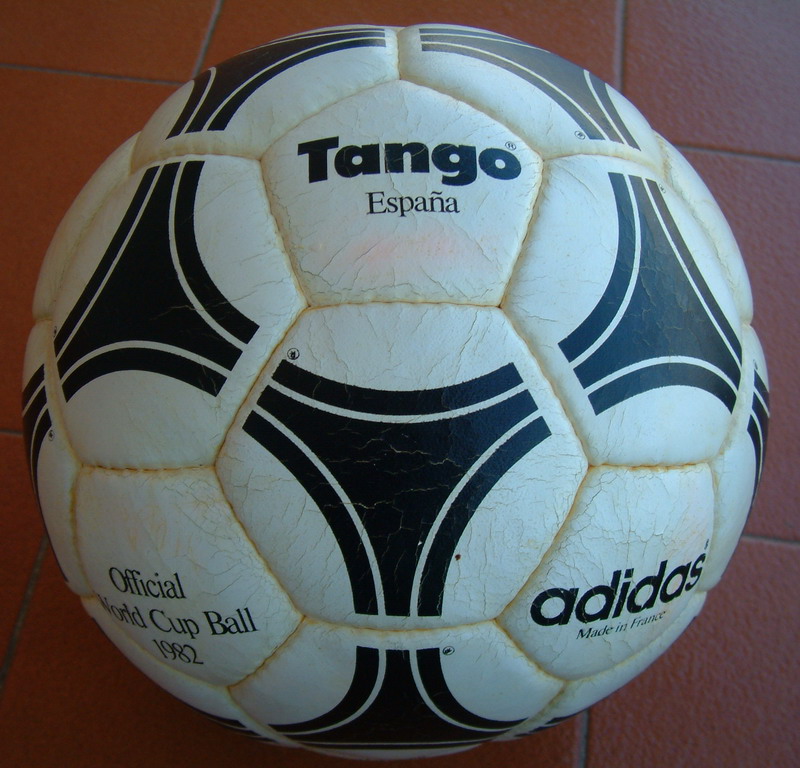 The adidas Azteca was the name used in honor of the indigenous people of that country, however, was the headquarters after the resignation of Colombia. It was the first official synthetic ball of the FIFA World Cup. The use of synthetic material increased durability and further reduced water absorption. 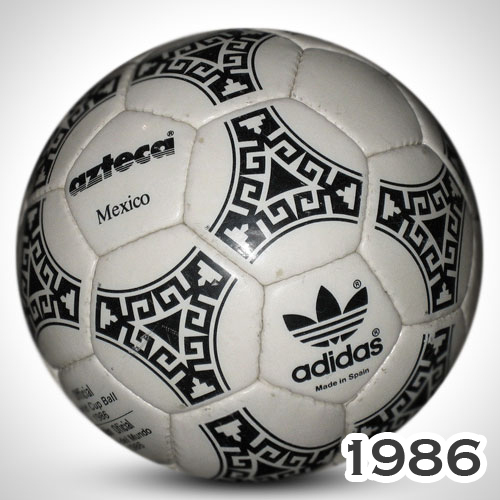 For many people the best soccer ball of all time, and of course one of the most sought after. Who has not played with him as a child in a park? Possibly, any classmate adored him. It had an excellent touch and although it was hard, it was very manageable. In addition, this ball is the only one of all the balls that was used in a World Cup. (1990), a euro (1992)and some olympic games (1992), of course they were also played in the best leagues in the world with this jewel. 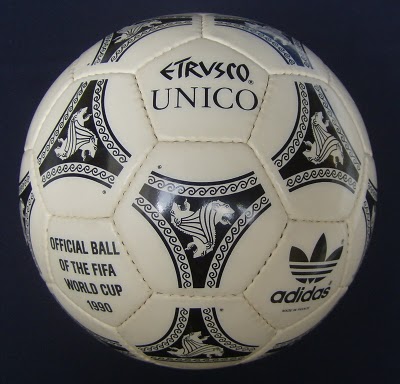 The Questra model is part of the family “Questra” which is composed of 4 official balls: Own “Questra” used in the United States World Cup in 1994, the “This Europe” used in the European Championship 1996, the model “Questra Olympia” that was used in the Atlanta Olympics in 1996 and finally the “Questra Apollo” from which they were made 1000 units with the logo of the “Royal Spanish Football Federation” and was not used for any of the previous competitions. 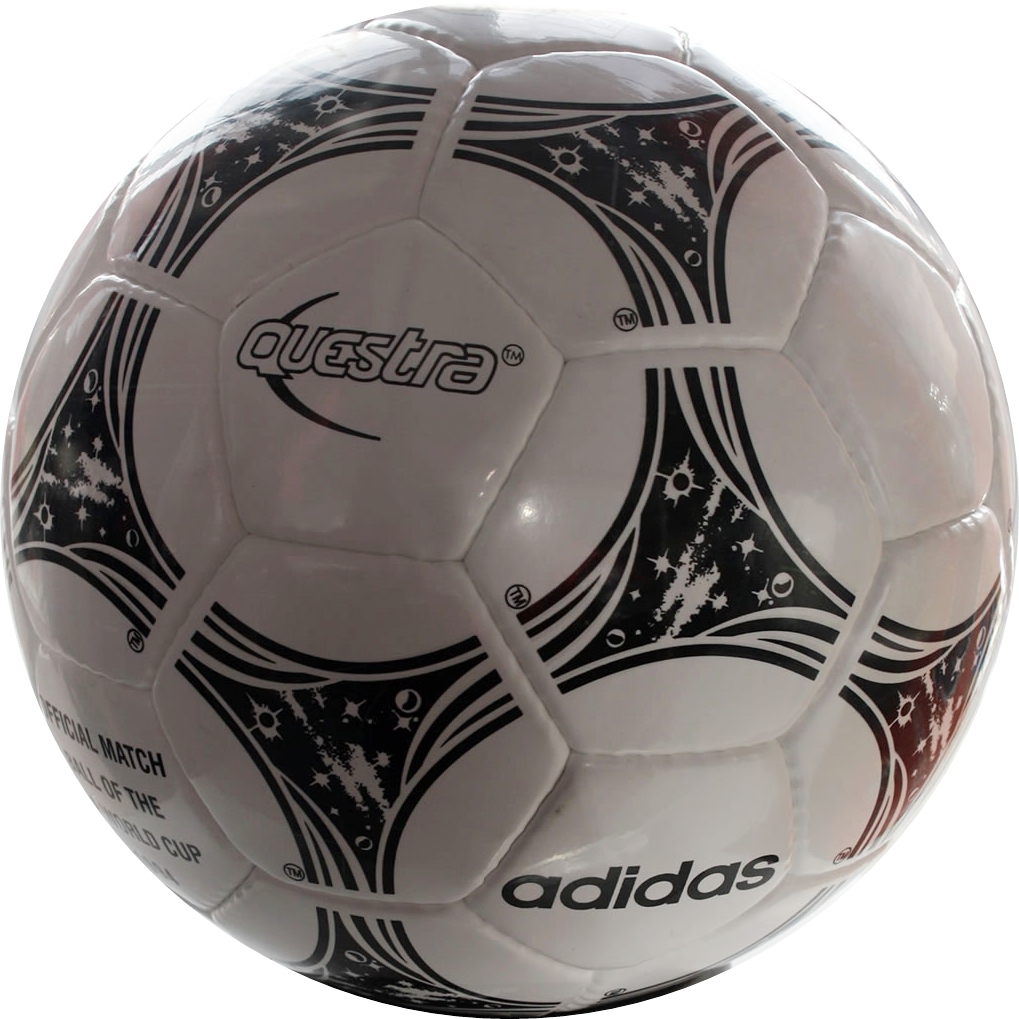 In 1998, they changed many things in the manufacture of the balls for the maximum competition, for example the Adidas logo was replaced by a more current and modern one. Zidane didn't seem to care much. France won their World Cup. 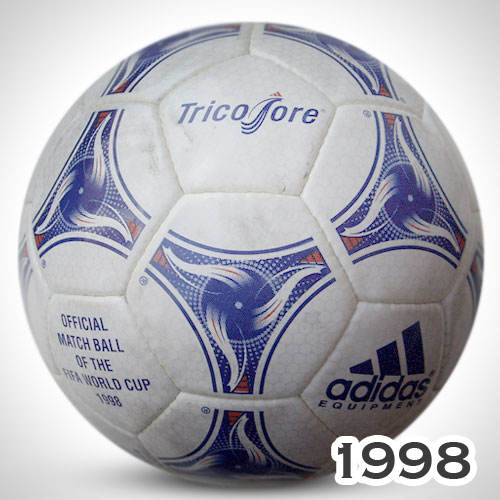 Another classic. The Fevernova was the first official World Cup ball that moved away from the prevailing traditional design since the appearance of Tango in 1978. Its striking appearance and use of color were entirely based on Asian cultures. 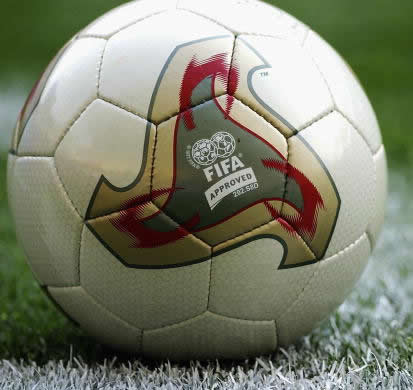 Germany's official ball 2006 was presented in Leipzig during the final draw of the competition. Your name: Adidas + team spirit, a term that in German refers to the decisive characteristic that every team needs to be able to win the golden trophy: team spirit. 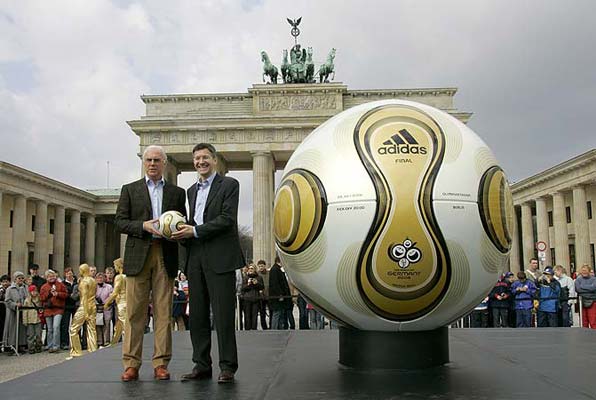 IsiZulu is a language spoken by 25% of the population in South Africa and in that dialect the ball was named Jabulani which means to celebrate in that curious language. On the ball you can see the designs of the stadium where Andrés Iniesta gave Spain the greatest glory. 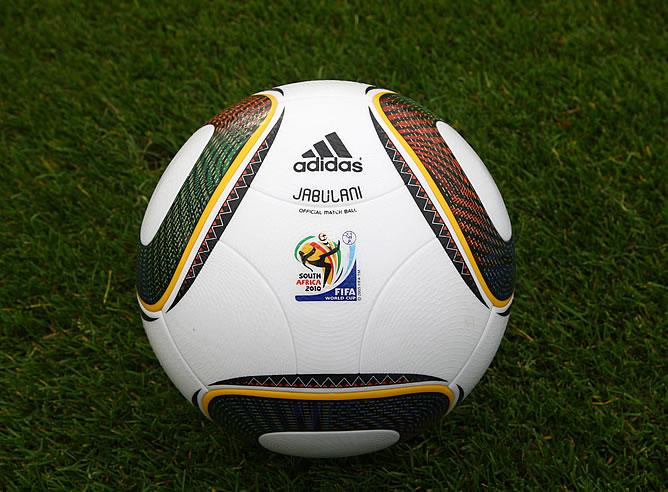