Ivory Coast: the last chance of the old guard

Finally the group draw was not malicious with African and what will be his third consecutive appearance in a world managed to avoid the dreaded group of death. They were released in Germany 2006 and both that appointment as South Africa 2010 they were fitted in the strongest groups championship, Very great selections and no option to pass the group stage. But nevertheless, in Brazil 2014 The script has changed and everything indicates that they could achieve qualify for second round.

Ivorians have in their ranks with world-class players, which they are leaders in their respective clubs with extensive and proven experience in major European competitions. Difficult mission that lies ahead Sabri Lamouchi, with a average age of around 30 years, the team urgently needs a generational change and will not be easy to forget the best batch of Ivorians Soccer Players in History. French coach has already begun with change, and test them are Lazina Traore 23 years (Anzhi) Serge Aurier from there 20 (Toulouse). For more than one will be his last world and for sure will want to finally break the barrier of the group stage and thus achieve their best performance in history. 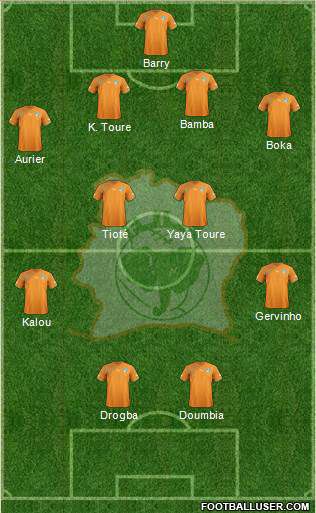 Former French midfielder Sabri Lamouchi is a complete stranger the benches, even the most knowledgeable I remember defending T-shirts Parma, Monaco and Inter Milan as a player. He took the reins of the Ivory Coast in May 2012 and since then more criticism than praise have surrounded his figure. Without a defined style of play was eliminated in the last African Nations Cup against Nigeria and failed to qualify for the finals with some other mishap.

The best selection of names on the African continent has never known what plays and even internationally renowned coaches like Eriksson or Halihodzic, and local and Zahoui have succeeded in establishing a concrete philosophy of play. Lamouchi unsuccessfully until now continues to live the golden generation of players with which account.

– Currently he ranked 24 in FIFA ranking.