Ghana, a selection of the most unpredictable

Apeada on penalties by Uruguay in the quarterfinals of South Africa 2010, Ghana goes to the World Cup in Brazil with the intention to repeat performance. With a solid block that combines experience and youth, but mostly, a lot of hope, the “black Star” It comes in the South American continent with one of his best ever templates.

Especially, Up midfield where men have desequilibrantes. Boateng, Asamoah, Muntari are household names in the European scene with proven experience in football at the highest level. And is that one of the virtues of Ghana. Almost all their players play in Europe and know how to compete in the elite of world football.

Ghana lost to Montenegro in their final friendly showing its two major flaws. Sometimes, lack of scoring opportunities and solving. In most cases, horror to build, to dominate. Because if something is no doubt that the African team will play counterattacking, direct football try to hurt opposing defenses through speed. For it, the heat can be one of the great allies.

Talk about their aspirations seems very difficult, maximum when they are in one of the toughest groups of the tournament, with Germany as clear favorite to move and Portugal as a top contender with the Germans to enter the second round. But nevertheless, far from thinking that classification seems impossible, there is always hope and give up defense when the same level is expected in the middle of the field. 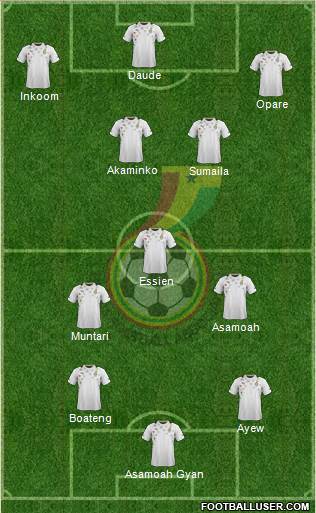 Akwasi Appiah will be responsible for directing the Ghana. And will do so with full knowledge of the facts. For this left side was former international in the early 90 with the “black Star” one of its members and three years ago was in charge of leading the U 21. Backlash lover, of the pressing in the rival camp, will try to spread some of his strong character to a block under his leadership will be more controlled than ever. Appiah because he does not miss any details.