world 2014: Brazil, the quest for a sixth title

Brazil is possibly the big favorite of the next World Cup. And it is for two essential reasons. History supports him as the best team in the history of the World Cups with five titles and two other finals played. And if that was not enough, play at home, hostess, a factor to take into account if one takes into account that in six of the 19 World Cups won the countries that served as local.

Of course, apart from these two aspects, Brazil plays with the advantage of having a great block with an excellent coach and some players capable of making a difference. It is true that you will not gather the constellation of stars from other times (partly because it doesn't have it), but neymar, Hulk or Oscar are footballers with enough entity to solve setbacks with some individuality brand of the house. But nevertheless, it will not be precisely the individual ones that distinguish the “canarinha”.

As could already be seen in the last Confederations Cup, Brazil will bet on a compact team that will find it very difficult to score a goal. A team “Europeanized” with better defense than midfield if we stick to the names. And it is that the defensive solidity of the Thiago Silva, Dani Alves, Marcelo or David Luiz will be key to winning a sixth title.

Brazil does not play well but pressures, run and steal the ball like never before. They are aware that they do not have the group of “baseball players” from other World Cups, but precisely, knowing her limitations make her more dangerous. The draw has placed her in a group without any expert in sweet (Croatia, Mexico and Cameroon) but that is perfectly accessible.

Another thing will be the crosses, Well, already in the round of 16 he will have to sweat a lot to look for the quarterfinals against the one that is second in a group B where Spain is, Holland or Chile. 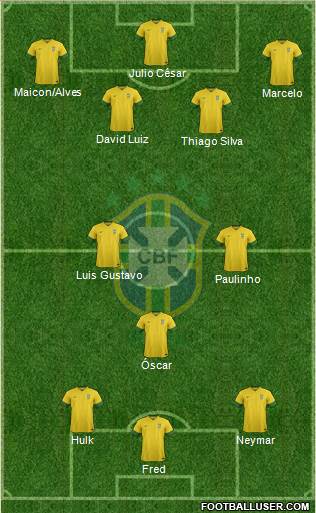 Felipe Scolari: except for a short-lived unsuccessful stint at Chelsea and Uzbekistan, his career has been developed by Brazil, where is a true myth. He already led Brazil in the World Cup 2002 where he won with a not showy but effective style. Now he will try to offer the same, success. That success that led him to put Portugal in the semifinals at the World Cup 2006.

Studious of rivals and conflictive when he thinks he should be, It is the typical case of a coach who prefers a block to an individuality. Thus, if something is sure, is that from the first to the last, everyone will run and defend as if their life depended on it.