Unequal draw for the Spanish teams in Champions

Mixed fortunes for the four Spanish teams participating in the next edition of the Champions League '. Barcelona came out favored in the draw to be included in the G group along with Benfica, Spartak Moscow led by Unai Emery and Celtic Glasgow, Scottish champions last season. They are rivals of entity, but without the favorite poster to commend the maximum continental trophy.

Benfica, an opponent who has already faced the Catalan club in the past, It is the most dangerous. The Portuguese side has three Spaniards: Nolito, Javi Garcia and Rodrigo. Strategy and tactic worked well Unai Emery on all your computers, It will put at stake against those of Tito Vilanova. Finally, Celtic Glasgow, a team that prints direct football, should not embarrass the 'Catalans'.
Meanwhile, Real Madrid have a tricky Group D as, In addition to white, It is composed of Manchester City (champions 'Premier'), Ajax (champion 'Eredivisie') and Borussia Dortmund (champion 'BBL'). Definitely, It is the group where most major European teams appear. Much morbidity have clashes between Mario Balotelli and Pepe, two men who used a lot of strength in his game, and between David Silva and Mesut Özil, two of the best catches in Europe. Dutch Ajax, trained by Frank de Boer, will return for another season at the Santiago Bernabeu and Borussia Dortmund, able to dethrone Bayern in Germany, will seek to surprise.
Valencia and Malaga have options to pass to the second round because his group the toughest opponent will be unseeded. In the case of Valencia, Bayern Munich Javi Martinez and current runner-up in Europe, It is the toughest opponent. The rest of the group F is comprised of the French Lille and BATE Borisov of Belarus, both with a lower level than the club 'che'.
Finally, the fourth-ranked Spanish League, Malaga, You will face with Milan Bojan, Russian Zenit and Anderlecht, the last two were champions of their leagues. Malaga has options to qualify as the Milan has lost most of its big players and Anderlecht is one of the most affordable teams in the Champions League. Zenit St Petersburg is a dangerous opponent for Manuel Pellegrini, they have managed to strengthen the attack with the new additions of Javier Saviola and Roque Santa Cruz. 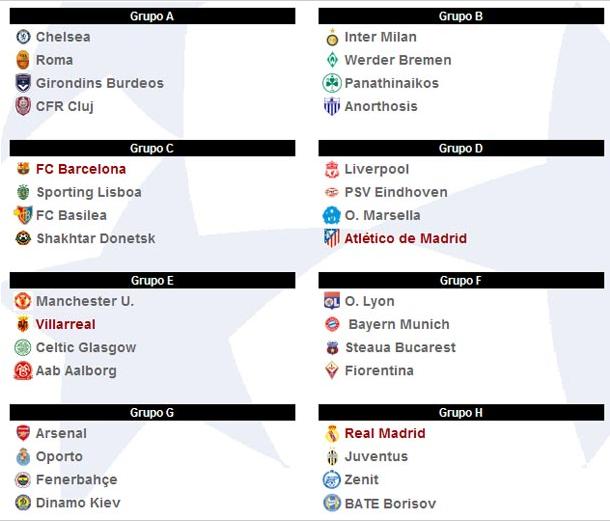 In the other groups, the defending champion, Chelsea Mata, Torres, Oriol Romeu and Azpilicueta, You will have a tough hurdle to overcome and another opponent that could cause difficulties in the group E. This is Juventus and Shakhtar, respectively. Danish Nordsjaelland, the 'ashen’ the 'Champions', It is also included in the group.

Arsenal Cazorla and Arteta will have as opponents in Group B Schalke 04, Olympiakos y Montpellier. Greek and French were the champions in their respective leagues.
The Spanish participation will also be valid in Group H with Manchester United's David de Gea, who will try to leave a clean sheet against Braga, Galatasaray and Cluj. Ferguson's team, maybe, the luckiest guy in a drawing that had the collaboration, among others, de Steve McManaman, responsible for directing teams in the respective groups.