Croatia goes to his fourth World Cup history and makes it as usual. With a full group of great individuals able to put in trouble any opponent that is put in front, but also capable of not being able to overcome any “pushovers” to be put on the road. So Croatia and everything not understand this is to lose sight of what this selection.

Rated late in a repechage more complicated than it might seem at first against Iceland, Croats have had no luck. First because they are in a tough group with Brazil seeded and Mexico and Cameroon (rivals of a similar level) as opponents with whom played knockout. And second, because spending, the crossing will be even more frightening, either Spain, Netherlands or even Chile.

And if that was not enough, if the opponents had not enough weight, more incovenientes. Mandzukic, his great striker, you can not play the first two games after being sent off against Iceland and the Central Simunic may not even be in Brazil because of some inopportune pro-Nazi chants.

Charge of opening the tournament against Brazil, it should be, the meeting touchdown and then go all out with African and Aztec. For it, will have a means of luxury field security Rakitic and Modric magic. Secured with talent who trusted a good performance. Rooms in the World 1998, the problems come when defending, it is well the backcourt his great handicap.

Alignment: (Mandzukic will miss the first two games through suspension) 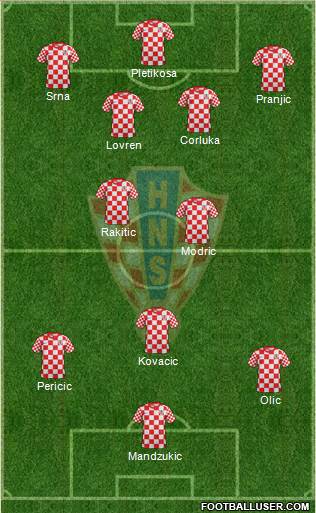 Niko Kovac and sus 42 years and claims to be the coach of Croatia after picking up a repechage team fully replacing Stimac, Davor Suker intervening by. We are talking about a new task for a man who had a very outstanding participation with the combined Croatian World of 2002 Y 2006. Player of great class, Now that his team will try to be faithful to what the intended.

For it, will seek to carry the weight of the game as long as possible against Cameroon and Mexico. against Brazil, but nevertheless, You have no choice but to defend and look for somewhere to produce what would be the first surprise of the Championship of the World.