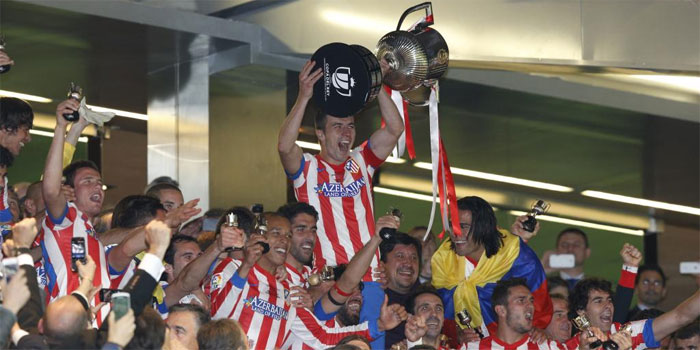 Atletico Madrid won the championship of the Cup of the season 2012-13 defeating Real Madrid in the disputed final at the Santiago Bernabeu to win the extension 1-2 thanks to a goal by Miranda. Its about 10 title mattress set far from the 26 Barcelona and 23 Athletic Bilbao, but it serves to end the curse 13 years without winning its eternal rival.

The match was intense and typical of a final. Cristiano Ronaldo opened the scoring taking advantage of a corner kick with a great header beat Courtois. From there, Simeone box and tie improved thanks to a good counterattacking move that was exploited perfectly by Diego Costa with ten minutes to finish the first act. Shortly before finishing the first part, Ozil crashed a ball to the post that was about to enter. 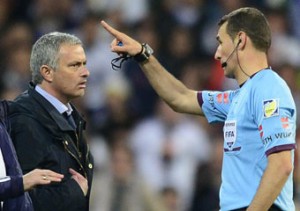 Mourinho was sent off for dissent in the Cup final.

It was a harbinger of things to come later because in the second half, the team led by Mourinho came away convinced that it was possible to add his unique title of the season and was. First Benzema and then Ronaldo would crash two balloons to wood, in a final which at times reminded one that Barcelona lost against Benfica in the European Cup 1962 and that was the end of the square posts. But nevertheless, and now with the Portuguese coach sent off for protesting the meeting it became entangled and some arrived safely in the lead in overtime.

In her, the give and take by both teams was clear leveraging the exhaustion of two sets gradually they accused the passing of the minutes. But nevertheless, Atletico seemed to get more whole physically. First Costa warned in one against one that Lopez stopped. Minutes later, Miranda took advantage of a cross from a corner to achieve the goal of victory. For though he tried the white box, he died in the attempt to including expulsion of Cristiano Ronaldo.

Just reward for a champion in this way culminates a dream season with qualification for the Champions and Cup title. Meanwhile, Real Madrid completed a disastrous campaign without any problems and full of success that will surely mean the end of Mourinho.

Hull player Ryan Mason, in serious condition after head injury
Neymar Falcao in the match against Brazil thousand
Andres Iniesta does justice to the Spanish football
The Generalitat Valenciana will cast a "ayudita" Valencia
First Division players who have just contract 2015
League incorporates 9 Saudi players assigned to the 30 of June
These are the 23 Spain squad for the World Cup of Russia 2018
Euro 2016, of surprises
A new brace from Messi leads Barca to glory
" rigorous" Álvarez Izquierdo was charged to Betis and gave the victory to Atletico