the day 3 Champions League 2014/14 gave many things to talk about. Real Madrid's resounding victory at Anfield Road against Liverpool for 0-3 with another Cristiano Ronaldo goal that brings him closer to the competition record that another Real Madrid player still has, Raul, showed that the white box is one of the favorites to win the precious orejona again. Barcelona and Atlético de Madrid settled their matches calmly after beating Ajax and Malmo while Athletic de Bilbao fell to Porto.

Tuesday's matches 21, They left 40 goals in 8 matches and it was the afternoon of the goals. Among others, Bayern put him 7 to Rome at the Olympic, el Chelsea 6 al Maribor, el Shakhtar 7 Bate Borisov and Schalke beat him by 4 a 3 to Portuguese Sporting. Wednesday's day left 19 goals where Madrid's win at Anfield stood out, the 5 Atletico Madrid, the 4 from Borussia Dortmund to Galatasaray and the surprise of the day after Ludogorets' victory against Basel.

Definitely, Champions, apart from being the maximum European club competition it is surely also, the largest in the world. Because, in Colgados, In collaboration with Onefootball APP we want to bring you the one that is for thousands of users who have voted, the best eleven of each day. This is the best line-up of the day 3 Champions League 2014/15. 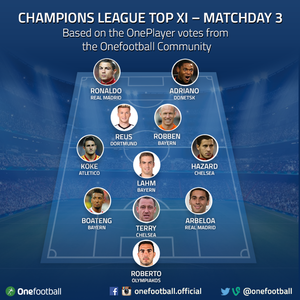 The best strikers in the history of Athletic Bilbao