The price of tickets in Spain: when being a member of Getafe is twice as expensive to be Bayern Munich

It hung for football today focuses on a thorny issue that tends to talk a lot: the price of tickets. How much is join Real Madrid, Valencia, Athletic or other smaller teams in Spain? A theme increasingly controversial in part because the Spanish stadiums ever have worse tickets. Television, some unfortunate times, a very severe economic crisis and excessively expensive prices have meant that every time the viewer costing more sacrifice go to a football field.

Although this season 2013-14 fertilizers have maintained or lowered in most Spanish enclosures, There are a number of evidence left in the wrong place at Spanish football: the clearest is to watch the live football is expensive, very expensive, more than in the rest of Europe. For example, be a member of Atletico Madrid is between 325 euros the cheapest chair and 1.000 if it is to watch football in the best way possible.

Something similar happens at Real Madrid where the cheapest ticket is 223 euros only for national parties (323 with Champions) Y 1.840 the mask (2.384 with Champions). With all possible variants offered to take the credit in one place or another enclosure, here as a first abnormality is detected: is more expensive to be a member of Atletico Madrid who, when theoretically best players and there's comfort in Chamartin.

Strange to say the least, although more data is really controversial. Valencia CF in decay and a team that could reach the same level as Atletico and Sevilla offers a cheaper fertilizer 200 euros 1.375 the most expensive. At the same level as four times more expensive than the Getafe box but sevillista or colchonero, where 420 euros worth a seat on grandstand. 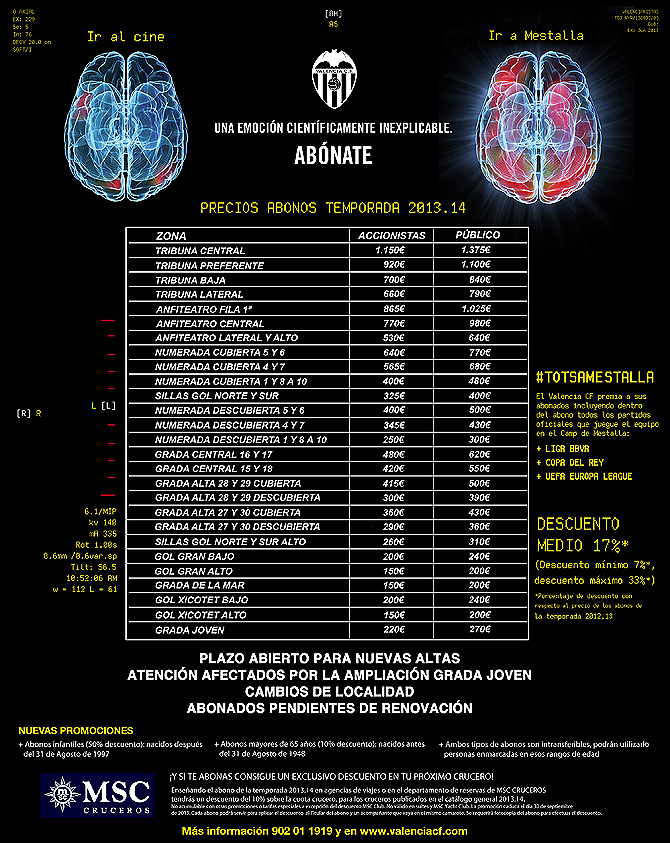 Madrid's box really is not understood. Very cheap expensive and cheap expensive. The cheaper fertilizer for general public (excluding unemployed, retirees or minor) vale 260 euros. Attention: more expensive than Valencia, Sevilla or Real Madrid, where for 33 euro less you can see similar position in the same league. Crazy still further provides other information sonrojador: be a member of the Bayern Munich this season cost about 120 If the cheapest pass is wanted.

Which is to say that today see Getafe costs more than double to see the European champions to adults between 35 Y 65 years with an average salary job that allows just removed the cheaper fertilizer also does not protect you from the rain or the cold thing if it happens in Bavaria. Are we hanging for football, o no?