The most watched football games in history

A great footballing event is often synonymous with television and millions hearings. The grand finals and European Championships and World copar usually lists most watched spaces in any country. Referring to Spain, These are the ten most watched broadcasts footballing history. Surprising that the final Real Madrid-Atletico, with an average of 11.033.000 viewers and an audience share of 62,1% is not among the top ten.

1- Portugal-Spain, European Championship 2012: 16.485.000 million and a share of 75,6%. A goalless draw, however, no one wanted to miss. The best came in the penalty shootout, where 18.141.000 millions Y 83,3% of share they followed as Spain agreed to his second consecutive European Championship final. The 90 minutes were then overcome by the end, but the penalty remains the absolute record in Spanish territory.

2- Spain Italy, Final Euro 2012: 15.481.000 viewers with an audience share of 83,4% They broke the record of people glued to a TV to watch a football game without penalty or extensions by. There were golden minutes more 20 millions who came to give a share of 90% Telecinco, chain that broadcast the event.

3- Spain Italy, Euro 2008: 15.372.000 (77.5%) They saw as the jinx of the quarters ended in the penalty shootout against Italy. The Italians who had never been defeated by the Spaniards said goodbye this way before what was to be the future champion of Europe.

4- Spain-Netherlands extension: the World Cup final 2010 He ended in overtime and Iniesta goal that gave the first World Cup to the Spanish selection. evidently, This meant that 14.582.000 of people (80.3%) you were aware of what was happening in South Africa.

5- Spain-Germany, Final Euro 2008: in Vienna 2008 Red ended with a curse that seemed never-ending. Fernando Torres scored a goal that gave the second European Championship history to Spain to delight 14.482.000 (80.9%) of viewers they were glued to the TV without giving credit to what they saw. 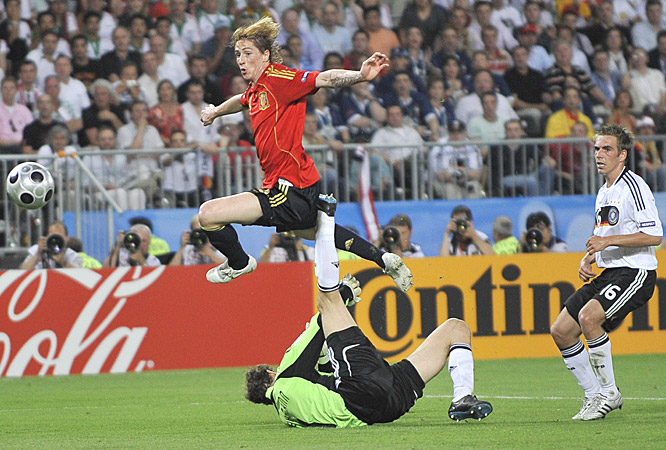 Torres scored the winning goal in the final of the Euro 2008.

6-Croatia-Spain, Euro 2012: Red suffered a great time to reach the quarter-finals of the Euro 2012. For many minutes he feared the worst because the Croatian push. But nevertheless, 14.265.000 million and 70,4% audience share could savor the pass to the last eight of Europe.

7- Barcelona-Real Madrid, Champions 2011: the series of duels 2011 between Madrid and Barcelona reached its peak in the round of the Champions League semifinals. 14.149.000 viewers watched as the Catalans managed to pass the final against Real Madrid of Mourinho.

8- Valencia-Bayern Munich, final Champions 2001: And they say that only Real Madrid and Barcelona have audience in Spain. A 24 May 2001, 13.630.000 viewers and an audience share of 68,8% Valencia saw as the bitterly fell in a dramatic penalty shootout that gave the fourth European Cup to Bayern.

9- Real Madrid-Barcelona, League 2011-12: He could not miss the classic. 12.123.000 of people followed the League match 2011-12, yet when you could see open to both sets. Two sets league exceed those figures seem to me very difficult for the near future.

10- Spain-Germany, world 2010: 13.289.000 spectators watched the match that Spain gave access to their first World Cup final. With Puyol protagonist and rival Germany again, a 77,3% of the audience tuned Telecinco not to lose detail of what happened. 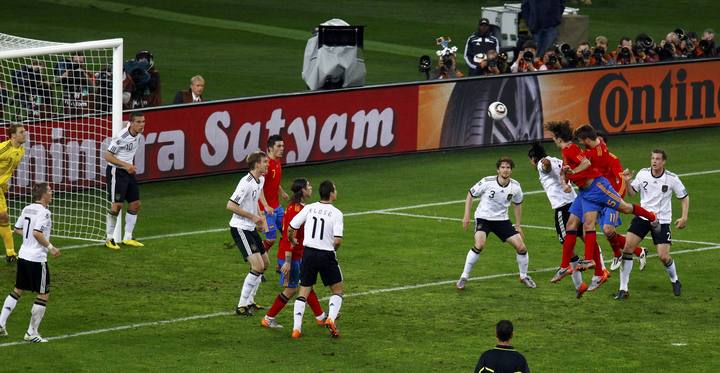 Puyol scored with a header against Germany 2010.

* Eurovision gala “The moment has come”, of 2002, that meeting Rosa, Bisbal and Bustamante holds the record of being the most watched non-sports history 14,3 million viewers.

Spurts greatest victories in history
Clubs with more international titles
What equipment you drop worse?
Ten things you should know about Copa Libertadores
Five of the worst signings in the history of the league in the winter
Five finals of the UEFA Cup unforgettable
Congratulates Puyol Real Madrid and Barcelona sends a message to
Team coaches no more interesting
Gabriel Omar Batistuta, "Batigol"
The best series of drawings on football