They say revenge is a dish best served cold, that tit, take them. The same must have thought Real Madrid fans that cold night in January 1995 when his team endorsed a rout of scandal to his eternal rival and step, avenged the outrage had occurred a year earlier.

If the other day we traveled Colgados for football until January 1994 to remember the manita FC Barcelona to Real Madrid today traveled up just one year later, until the 7 of January of 1995, night that Real Madrid Barcelona avenged, the night the Madrid came true the saying “tit, take them”.

And curiously visiting Barcelona Real Madrid feud almost a year after humiliating Real Madrid in the Nou Camp. If in January 1994 Romario who was smashed to Real Madrid, in January 1995 It was the Chilean Ivan “BAM BAM” Zamorano, who crushed networks defended the goal by Busquets. The Chilean, in a spectacular night he scored a hattrick which destroyed the team Cruyff and confirmed that the “Dream Team” It was beginning to end. 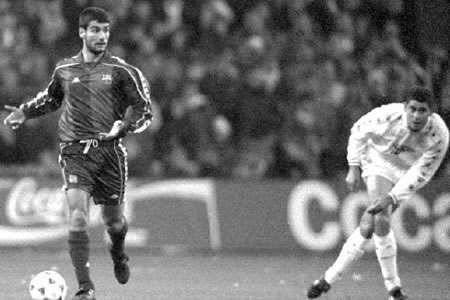 Amavisca and Luis Enrique, Real Madrid shield kissing in celebrating the goal and Barcelona icon years later, They closed a rout of scandal. Curiously winner was Michael Laudrup both parties, because he played two games, one on each team, but always on the side of the winners and giving assists both parties in the goals. The Great Dane.