The former Málaga player, Santi Cazorla, has been presented in London by his new team, after his departure from the malacitano club, after the hard crisis that the club is going through due to the refusal of Sheikh Al-Atanhi, owner of the shares, to keep investing more money in the club. The Spanish international, He was happy with his new shirt and declared that: “I am very happy to join Arsenal. This is a club with great players, a fantastic stadium and a great crowd. The Club has one of the best coaches and his style of play is recognized and admired throughout the world.. I am very happy to join one of the great teams in Europe and also in the Premier League”. 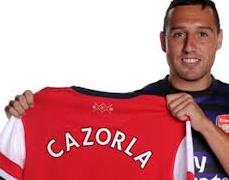 On the other hand, your new coach, Arsene Wenger testified about his new player: “Santi Cazorla is a great signing for us. He is a player with great experience at the club level and internationally, and it is sure to significantly increase the quality of our equipment”. “He is a versatile player, You can play in the center of the field or stand on both sides of the field. Technically he is very well endowed and will be a great advantage for Arsenal Football Club. We are delighted to have you join us.”. I declare the French technician.

The player on the other hand, he is already in Germany with his new colleagues, thus closing his malaguista stage that has lasted a season, where the blue and white team made a leap in quality, qualifying for the Champions League. Malaga for its part, wishes Cazorla ” the greatest of successes” In addition to thanking his effort and dedication during the time he wore the Rosaleda team shirt.