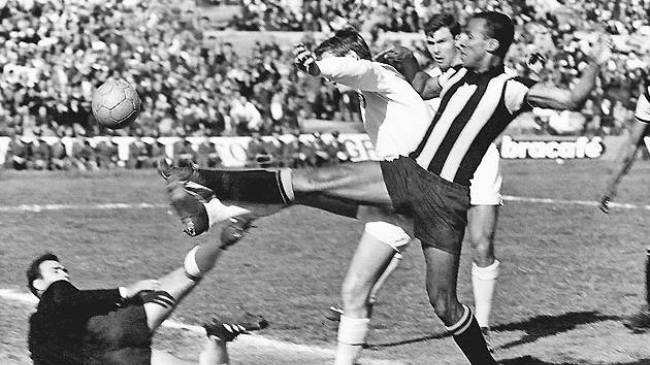 Alberto Spencer,one of the best gunners during the 60's.

Do you know Alberto Spencer?. Some players fall into absolute oblivion despite the feats performed or simply are not known outside their country. Alberto Spencer is the top scorer in the history of the Copa Libertadores and one of the best South American players of the twentieth century. Did you know?, if not so, we present it.

Alberto Pedro Spencer Herrera was born 6 from December to 1937, in Ecuador. He played center forward and was nicknamed under the moniker “Magic head”. He was the son of a Jamaican of British origin and started playing in his homeland, debuting at 1955 League of Ecuador. He scored his first goal just eight days after his debut, beginning and, a successful career that drilling rival networks. In 1959, He was hired by the Club Atletico Penarol where he was to become a legend. Framework 326 goals and won an enviable palmar. Tres Copas Libertadores, two Intercontinental Cups and seven championships baggage Uruguayans were achieved during his stay in Montevideo. further, It was four times top scorer in the Uruguayan league and still holds the record for being the top scorer in the history of the Libertadores Cup 54 many. In the Intercontinental Cup, Only Pele has scored more goals than him, Spencer surpassing the record only by one goal.

After a decade in Montevideo, He returned to Ecuador, his native country, to play in the Barcelona of Guayaquil with whom he won the league in that country. curiosity given that since spent a decade in Uruguay, he was offered naturalized Uruguayan. Spencer could have played a couple of World if he had but decided to keep their Ecuadorian nationality, of which he was very proud. Even so, Because the old legislation did not like the present, played a friendly with Uruguay, though his selection was always to Ecuador. He finished his career with a total of 451 goals and is located at the position 20 of the best players in the history of South American football. After hanging up his boots, he moved to Montevideo, Where, in 1982 the Ecuadorian government appointed vice consul in that city.

Alberto Spencer's shirt Penarol where he scored a time

All who knew him noted his human quality and personal. The 3 November 2006 He died of heart problems at a clinic in Cleveland, USA. Model City Stadium in Guayaquil changed its name to Estadio Modelo Alberto Spencer Herrera in his honor. Undoubtedly one of the greats of his era and the history of football, perhaps not recognized as it should.

History of clashes between Spain-Italy and Brazil-Uruguay
The classic bottles, Madrid-Barcelona rivalry taken to extremes
The best British and Irish players in League history
The ten worst signings in the history of Real Zaragoza
The youngest footballers to debut in the Spanish League
Mundialistas teams have players
All winners of the Golden Ball from 1956 until 2013
Players who blundered with the team that signed
Official shirts World 2014
The former Valencia and Betis still scoring goals for 38 years