Andres Iniesta does justice to the Spanish football

Manchego Andres Iniesta, Barcelona midfielder and Spanish selection, He was elected today as the best footballer in Europe last season during the draw for the Champions League, held today at the Grimaldi Forum Monaco.

Iniesta, Euro champion 2012 and a semifinalist in the Champions League, It exceeded the vote live 53 sports journalists, one for each member country UEFA, to Lionel Messi (Barcelona) and Cristiano Ronaldo (Real Madrid), the other two finalists of this award.

“I am happy. Very happy to have won this trophy. Above all it is a privilege to be on the podium with these two monsters of football”, Iniesta said the prize in hand.

Barcelona player dedicated the award to his teammates and selection. “I want to share this award with Leo (Messi), my partner, and other teammates and team because without them the prize does not make sense”, he added. 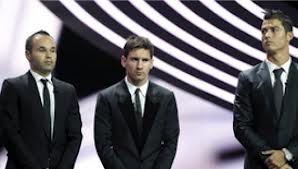 Iniesta just overtakes his teammate Leo Messi, last year's winner, to which exceeds an individual distinction. Especially after the appointment of the Ballon d'Or the 2010, after the World Cup, where the manchego player and also Spanish Xavi Hernandez started as great candidates and were beaten by Argentina.

Iniesta has resolved, partly, disappointment that. Elected the best player of the last European Championship, He has won the recognition of 53 journalists who have exercised their vote.

The talent of the Spanish footballer has been more valued than the goals and statistics signed by his fellow podium, Messi and Cristiano Ronaldo, who they broke all records scorers and led their respective teams.

Iniesta, Ronaldo and Messi are becoming common in individual choices. The trio is also with more options dispute recognition to the best player in the world, choice is determined by the end of the year.

Spanish football was the one that had representatives for election to the best player in Europe. Of the top ten, seven are part of the League of Spain. Three are Spanish. In addition to Iniesta, the winner, teammate Xavi Hernandez finished fifth in the voting, behind the Italian Andrea Pirlo, and Iker Casillas, of the sixth Real Madrid, .