Atocha Stadium was the sanctuary of the Royal Society and one of the most classic stages of the Spanish League for many seasons. Hanged for football, He wants to talk about a stadium disappeared, which today no longer exists. Maybe it was not the prettiest, even the most elitist but it was one of the most historic stadiums in Spanish football. We moved to San Sebastian twentieth century, those rainy afternoons, barro, smell of cigar and fight on the lawn. Welcome to Atocha.

Atocha was launched a 4 October 1913. The rival for such an event could be no other, the eternal rival, Athletic Bilbao. That evening a century ago, They began eighty years of history, where many teams would suffer a great time on the lawn of the legendary stadium donostiarra. With its ancient bleachers, their funds without seats, constantly filled to the brim, where players, They felt the breath of the fans on their necks. In the frequent rainy afternoons San Sebastian, the lawn was filled with mud where the most painted of football stars, He had to roll up and fight to win a match. The time in Atocha, They were the true essence of the sport, It was pure football, It was real football. 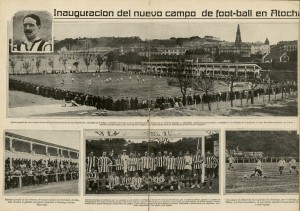 Picture of the day of the inauguration of Atocha.

The distance from the stands to the field line, It was so minimal, who came to intimidate rivals. Di Stefano from, Puskas an Kubala hasta Laudrup, Koeman, Hugo Sanchez and Butragueño, Cruyff and Neeskens through, many were the stars of the time they played at the legendary stadium in San Sebastian with very mixed fortunes. Atocha, He had four tiers with some old grandstands, where the funds lacked seats were filled with fans, they were almost past the keeper.

The Royal Society in Atocha lived the best years in its history, where he won two league titles followed the 1980-81 and the 1981-82, Copa del Rey in 1987 and Supercopa, in fact, since the change of stadium, has not risen again no title. The San Sebastian club has lived both sides of the coin in recent decades. 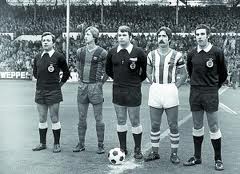 Cruyff was one of many stars who went through Atocha

He came to have a capacity of 27.000 viewers, but ultimately, in the 80's, for security reasons, It was adapted its ability to 17.000, what made him a pressure cooker whenever playing the Real at home. For the same reason, it had to change stadium, since security measures were outdated and almost nonexistent. The cost of the works to adapt to new times Atocha was so high, which had to make the decision to build a new stadium, the current home of the Royal Society: Anoeta. 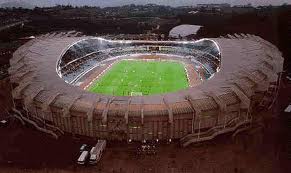 Anoeta is the home of the Royal Society from 1993.

The last player to score an official goal was the Portuguese Ocean Atocha. It happened in 1993 and it was the last time you celebrated a goal Atocha. Times change, and the 90's, They gave way to the modernist and beautiful Anoeta Stadium. Unlike the ancient Atocha, the current home of the Royal Society, It has some athletics tracks that separate the public from players, perhaps a little cooling environment.

The goal of Oceano, It was the last of the history of Atocha.

Atocha old stadium began to be demolished the 22 June 1993. That day the story of Atocha officially ended, 80 years of blood, sweat, tears and football days were buried in rubble to make way for a legend. Pure and simple history of Spanish football was replaced by a few floors of official protection, something unromantic, but life and changing times so. 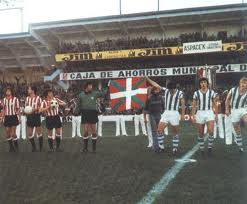 This photo of this derby Atocha in 70's caused much controversy at the time.