The club Partick Thistle Football is a team located in a suburb of Glasgow playing in the top flight of Scottish football. But nevertheless, the story or anecdote that has jumped in recent times is the curious initiative of club coach, Alan Archibald. If you train badly, You'll have a less peculiar as punishment, You will train disguised as anything.

Coach, punishes the player who has coached worse forcing the player to get a costume for training that is far and far from discreet. The rule, was imposed last season where the outfit, It was much less curious, a dress of pink ballet dancer. More than one, I had to put on his boots and jump into the lawn with such fatigues. 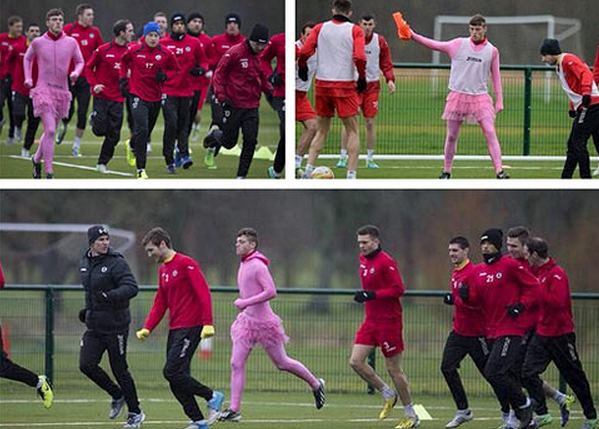 This season follows the standard, but the battle suit has changed. This time, It is a suit that mimics the human body musculature. Not the best but it is still a little softer than the previous season. The goal of the coach, a rigorous type, It is that none relax and if you do, have to end up immortalized in this manner and put up with the jokes and laughter of his companions. So the next training will run more.

How any team or player in the Spanish league disguised in this way you imagine?, ¿A Messi, Ronaldo, Neymar or any other on the green with these peculiar costumes?, Of course it seems very difficult but the initiative of this team is the less curious.

Spain-Uruguay, a friendly flavored Confederations Cup
Lists squad for Copa America 2019
Collecting scrap metal to be one of the world's best in his position
It was so hypes for the World Cup draw Russia 2018
Levante Sergio Ballesteros retires
Barcelona beats Benfica 0-2 but in exchange for an injury Puyol
The best images of the World: day 4
Malaga continues its imperial march in the Champions winning 1-0 al AC Milan
The best bets of the weekend
Real Madrid 2- Barcelona 1: the worst classic of all