Freddy Rincon in search and arrest by Interpol

Interpol has published on its website an arrest warrant against former Colombian footballer Freddy Rincón, investigated for the crime of money laundering.

According to various Colombian media, the former player among others of Real Madrid, is being investigated for maintaining ties with the Brazilian drug trafficker,Pablo Rayo Montaño, who is already in prison. In May, the former soccer player was linked to an international drug trafficking plot. Now Rincon, at the request of the Panamanian justice, will be searched in 186 countries you go to 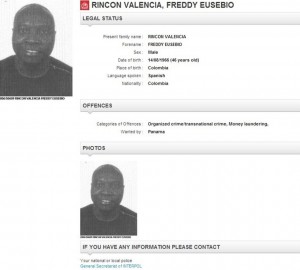 intended for the Interpol circular, which is of immediate and mandatory compliance.

“There is no evidence against me. The truth, I don't know where this new question came from. I have a lawyer in Panama who is going to talk to the judge”, stated the former player to Semana.com.

The facts come from the 2007, when, at the request of the justice of Panama, Rincón was accused of money laundering from drug trafficking. In that same year, the player was arrested in the Brazilian city of Sao Paulo, where he lived accused of laundering illegal resources from a drug trafficking organization commanded by Pablo Rayo Montaño.

According to the Panamanian Prosecutor's Office, The ex-Colombian footballer acted as a front man for Rayo Montaño in a fishing goods company in Panama, Nautipesca, intervened during an operation against the mafia clan. Rincón then admitted that he knew Rayo Montaño from childhood and that he was reunited with him in Brazil, but he denied having ties to the mafia supposedly run by his friend, somewhat counterproductive as he recognized that he had invested close to 200.000 dollars in a fishing equipment company owned by the drug lord and his mafia.

Corner, who was detained in Brazil for four and a half months,He has stated that during that time he already delivered all the proof that the money invested in Panama was the product of his work.