Okunowo got to play three games in the Champions League with Barca. PHOTO: Sport

Samuel Okunowo has the dubious honor of being one of the worst players in the history of Barca. During the late 90's and early this century, the Barcelona, he signed some, if not almost all, of the worst signings of history.

born 1 March 1979, a Nigeria, Okunowo arrived in Barcelona after being seen in a tournament in Lisbon by scouts from FC Barcelona club. He was playing a tournament with his club, el Shooting Stars, with whom he had debuted the 16 years, when the Catalans technicians decided to incorporate it into its subsidiary.

Military after only one season in the subsidiary blaugrana, Louis van Gaal, Players defender Bogarde type or Reiziger, He decided to upload it to the first team of Barcelona with which got to dispute fourteen matches and three Champions League this season 1998/99. 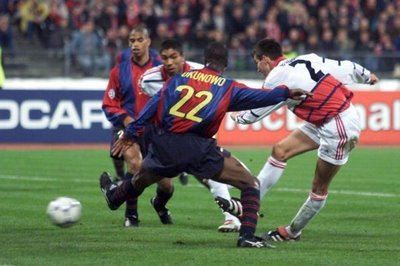 Okunowo got to play three games in the Champions League with Barca.

Okunowo was a right lateral, short technically and tactically quite limited, a player is called the heap. In fact the next season no longer wearing the Barca shirt. Released by Barca, Okunowo marched toward the Benfica and since then, his career was completely downhill. His case was very similar to Amunike.

In the year 2000 It was on loan from Barcelona to Badajoz playing in Second at that time. Two years after his debut with the club, the player was playing in the Second Badajoz. Passing through the first level and the Spanish Liga was fairly short-lived.

Okunowo happened with more pain than glory for the club and the League.

His career went downhill without brakes, to complete a career that would not have been mediocre international five times with Nigeria and participated fleetingly with Barca, with him by the way, He won a League. His career post Barça went through leagues and countries as loose as unique as Iran, Ukraine, Maldiva's Islands, Albania, Romania and teams English Fourth or Fifth Division.

What was Okunowo?. Finally, He returned to his native country in 2012 He retired from football to 34 years and made headlines again, not by issues related to the world of football. After a fire, his apartment in Ibadan, his hometown, where they say, He helped evacuate the building saving the life of a neighbor.

PD: If you want to read the entire list of the worst signings in the history of Barca, you can click here