The second leg of the China FA Cup final between Guangzhou Evergrande and Guizhou Renhe at Tianhe Stadium was going to be exciting. The 1-1 of the going I had left everything open, but in the first minutes it was clear that why Guangzhou, is the champion of the Chinese League.

Very beginning of the meeting, Guangzhou scored their first approach to the area. In the minute 2, Lucas Barrios in a shot 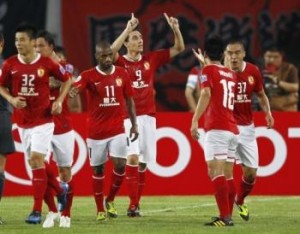 spectacular, was going to score after a ball came from the right and raised the 1-0 the net.

Despite the goal against, the Guizhou, he did not lower his arms and in the minute 5 He already had his first arrival at the rival goal. Rafa Jordà headed a Yu Hai cross without much luck. From that moment on, the match was going to go back and forth for both teams..

The “Spanish” Guizhou Renhe tried to have more presence in the match, but his lack of definition in the attack plays prevented the equalizer from arriving. After half an hour of play, Guangzhou was becoming more and more comfortable and began to enjoy more dangerous chances.

When the players were almost thinking about the break, in 44 ', defender Zhang Linpeng scored the second goal for Guangzhou with a header from his teammate Memet Ali. Too much punishment for a Guizhou looking to get into the match, but that he could not find the way to the goal.

With a favorable marker of 2-0, Guangzhou started the second half ready to sentence. Muriqui had the third goal in his boots, but the Guizhou defended well and attacked without complexes.

After a few minutes of the second half, despite the fact that Guangzhou dominated, Guizhou became more aggressive and this made him get fully into the game. Even more so when the Spanish striker Rafa Jordà managed to reduce distances after finishing off a dead ball inside the 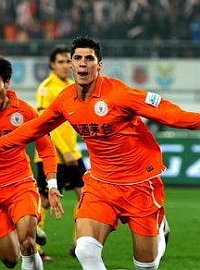 area. The 2-1 opened the game and made Guizhou look for a draw.

But Guangzhou countered the surprise. In 66 ', Lucas Barrios first finished off a ball from the right to make his double and return the peace of mind to a hobby that celebrated the goal by dedicating a “wave” to their team.

With 3-1 the party was almost sentenced. While the Guizhou, without lowering your arms, I tried, Guangzhou stopped playing and waited for the conclusion of a game that looked won.

In the last minute, Lippi's team, had time to finish the game. With the Guizhou overturned in attack, the ball reached Conca, that brand-free and within the area, controlled the ball and with a placed shot he got the icing on the cake 4-1. After the kickoff, Guizhou got through Rao Weihui a sterile goal that would mean the 4-2 final.

Final of a match and a final that crowns Guangzhou as the best team in China after achieving the double and leaves the “Spanish Ghizhou” as fourth in the Chinese League and Cup runner-up.