La Liga 2013/14 It is history. The Spanish championship, closed. Finally and in one last heart attack game, as if it were a cup final, Atlético de Madrid was proclaimed champion after drawing at the Camp Nou against a Barcelona that despite the thousand and one adversities suffered and after failing in more games than ever, he arrived with the possibilities intact until the last game against his people.

Real Madrid was third. The white team lost all their options in a horrible week with three punctures in a row, something that seemed the usual trend of the last days in the first three and contenders for the title until the last games. During the final leg, the three teams left many points showing that the accumulation of minutes was already beginning to weigh on their legs.

European squares were also defined well in advance and very clearly. Athletic Bilbao will accompany Atlético in the Champions League, Barça and Real Madrid. Sevilla, brand new champion of the competition, Villarreal and Real Sociedad, will be the representatives in the Europa League. Valencia, 8º, experienced its worst season in the 21st century and was first out of Europe in the new century. Neither Djukic nor Pizzi managed to straighten the ship. His neighbor, the Levante trained by Joaquín Caparrós, lived another quiet season and was framed in the top ten with an amazing Celta de Vigo trained by Luis Enrique.

Espanyol and Malaga, managed to save themselves with less trouble than it seemed in the end. Elche and Almería achieved salvation (the Andalusians on the last day) and none of the three promoted lowered to Second again after a campaign. Getafe and Granada were finally saved on the last day after victories at home on the last day condemning Valladolid and Osasuna to return to the Second Division. Betis, without a doubt the great disappointment of the campaign, He was the bottom player in a season to forget in which they even competed in Europe but always occupied the bottom of the table.

Tata Martino's Barcelona, Leo Messi, Neymar and the Betis season. The cules, always favorites to everything, finished the season blank after losing all the titles at stake. Leo Messi, considered by many the best in history, completed what is undoubtedly the worst season of his career.

Missing and out of combat, he was injured for several months. Even so, was the second top scorer of the championship. Neymar, It was undoubtedly one of the great disappointments especially due to the cost of his signing and the expectations that they sold on him. In downloading a bit from Barcelona, ​​it must be said that he suffered serious injuries, the resignation of the president due to the murky matter of the signing of Neymar and the death of Tito Vilanova.

Real Betis was the other big disappointment of the season. After his brilliant performance in the previous tournament, the expectations in the green and white house for this one were much higher. The prompt dismissal of Pepe Mel and the bad dynamics, they ended with a relegation at bottom and three coaches in a season to forget, even in Europe where the eternal rival was champion after overcoming a tie that seemed won, in Villamarín and in the penalty shootout. I said, a year to forget.

The decline of Valencia. The Valencian team, completed the worst season of this century being even outside of Europe. With two coaches, they just added 49 points and were always a long way from reaching their greatest goal, Champions. The Europa League made up the season a bit but the hard blow from M'Bia's goal in the minute 94 brought them back to reality. We'll see what happens in the new era Peter Lim.

The great season of players like Diego Costa, Iturraspe, Keylor Navas, Boil, Gabi, Godín, Filipe Luis, Aduriz, Javi Guerra, Sailing, Griezmann, Rakitic, Bacca and many others who took over from others with more name but in a frank decline. Definitely, it was your tournament.

The League break of two. Since 2004, year in which Valencia won La Liga, no team other than Madrid / Barça had won the tournament. A decade of bipolarity worsened even more since the bloody economic crisis began. With the victory of Atlético de Madrid, a dynamic was broken that seemed to have condemned the Spanish championship to the most absolute boredom. 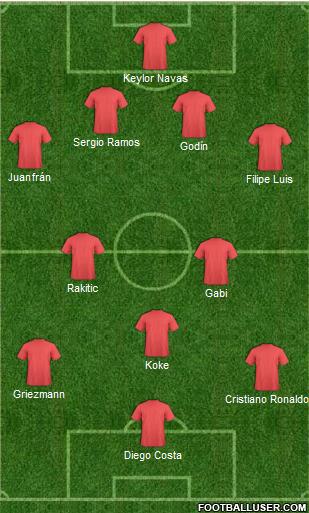