The biggest farce of football history

The 3 September 1989 possibly more fraud occurred that he has made to football. Occurred during the qualifiers for the World Access Italy 90. Brazil and Chile, framed in the same qualifying group ( then they did not play all against all) Maracana faced in his last game. Chileans should win, while Brazilians, the tie was worth them. Everything was normal in the lead up to the minute 70. The “canarinha” He won by 1-0 and it looked like the final minutes would be a mere formality.

But nevertheless, Nothing is further from reality. Suddenly, a flare fell on Roberto Rojas, the Chilean national team goalkeeper and one of the best in the world at that time. The goalkeeper fell to the ground as he writhed in despair with obvious symptoms of pain. The face, totally bloodied invited to think the worst. So much, the referee had to suspend the meeting, While “Condor” Rojas was carried by his companions to the infirmary Stadium. 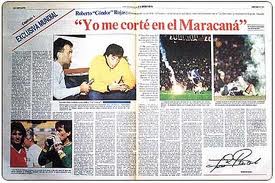 The stunned stadium, journalists impacted. Everyone believed. definitely the party was canceled at the insistence of Chilean players not found “full guarantees” returning to field. But nevertheless, everything was fraud, a farce, the big lie Football. Una Machiavellian idea to eliminate Brazil, or at least force a replay on a neutral field. Rojas, He had hidden a knife between his gloves and flare brand, curiously “Condor”, It had been launched by such Rosenery Mello, a girl from 24 years, which would become a myth in Brazil. So much, even he is going out in the magazine “Playboy” and win big money.

But nevertheless, the passage of time made it clear to Rojas and his ideas of Nobel Prize. Various studies by scientists showed that it was physically impossible for the rocket had hit the place of the goalkeeper body from where it had been launched. further, Rojas statements, and gestures of Chilean players at halftime slights by the Brazilian fans sowed doubts. And if that was not enough, the magazine Argentina “the graphic” He revealed a picture where you could see exactly what the flare had fallen away half a meter and the position of goalkeeper.

Before such pantomima, FIFA had contemplations. He gave the match lost to Chile 2-0, he drove out of the qualifying playoffs Italy 90 and prevented him play the following access to the US 94. Rojas, It was the worst part: He was banned for life, Although FIFA granted a symbolic pardon 2001, when he was 43 years.

Time after, Roberto Rojas apologize for his grotesque action and recognize the action: "I cut myself with a Gillette and farce was discovered. It was a cut to my dignity. I had problems in my home with my wife, my colleagues gave me back ... but if I had been Argentina, Uruguay or Brazil would not be suspended, but since I'm Chilean was not given the chance to redeem myself ". Definitely, regrettable.

One thought on “The biggest farce of football history”