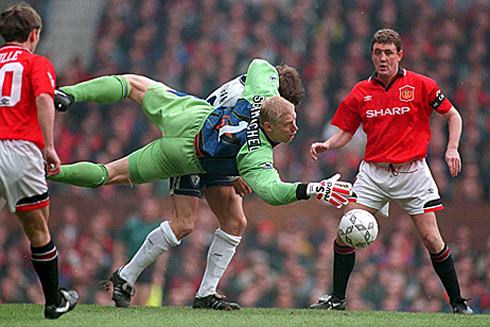 Many people consider Peter Schmeichel the second best goalkeeper in history, only behind Lev Yashin. Alto, safe, sober, strong and goalkeeper great reflexes, the goal of Manchester United and the Danish national team for many years was well covered by this giant 1.91 usually like to get shirts XXXL.

Born in Gladsaxe in 1963, very few they are those who know that his father was Polish and up 1970, he retained that nationality. Or that even the 24 years, when he signed for Brondby, he devoted himself to combine football with other jobs (textile factory, nursing home, World Nature Fund or advertising companies). And it is that life was never simple for Schmeichel. After debuting with 8 years with the team in his neighborhood, High-Gladsax, which then merge in Gladsaxe-Hero BK. In the latter Svend Aage group would meet Hansen, a vital coach for which would become a “second father”, He never better then marries his daughter.

A preliminary step upon arrival at Hvidovre, where Schmeichel would be strengthened as the Great Dane goalkeeper moment, which would lead him to 24 years to be signed by the great country team, el Brondby. With the team from the capital, his career would hit a qualitative leap that would highlight internationally, enough to debut with the national team in May 1987 and being the head of Denmark goalkeeper at Euro 1988. 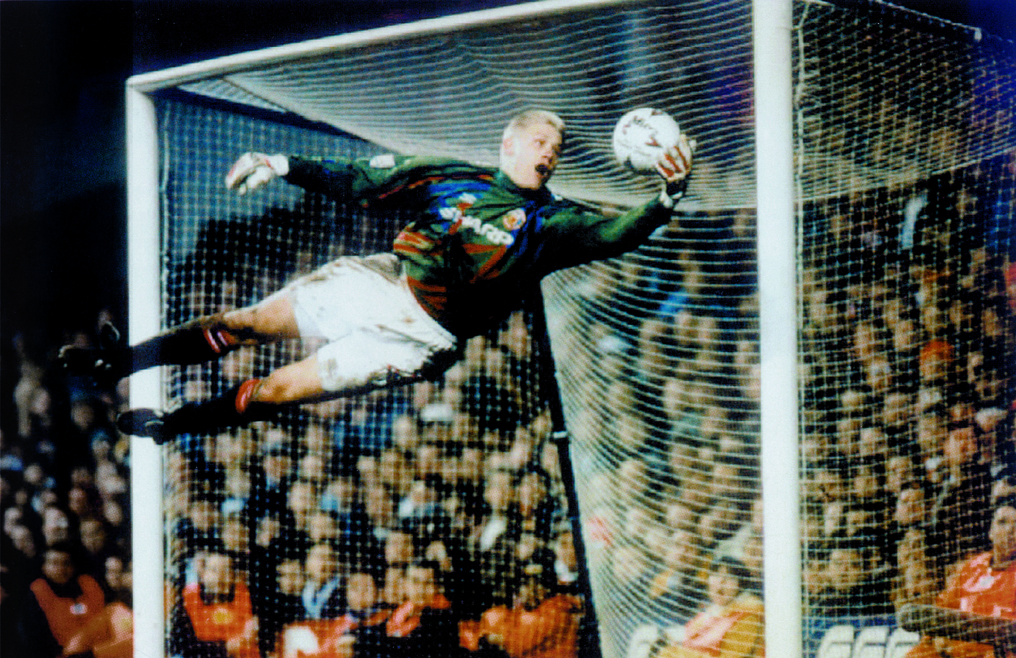 Schmeichel was able to fly to for a ball.

With Brondby win four league titles and manage to reach the semifinals of the UEFA in his final year at the club, the 91, Roma get where only defeat thanks to a goal in the last minute of the second leg. Its good performance under the posts and security and character imprimía the rest of his companions led him to be hired by a large, Manchester United would pay 505.000 pounds for his services, Alex Ferguson described figure then later as the “deal of the century”.

Old Trafford and “red devils” would enjoy up 1999 of the great years of Schmeichel. There is consolidated as “Best goalkeeper in the world” in 1992 Y 1993 and get carve a track record with five leagues, 3 FA Cups, 1 League Cup, 1 UEFA Super Cup and Champions League, that achieved in that memorable final 1999 in Barcelona, where Manchester achieve back from two goals in the last two minutes of the game to Bayern already seen with the Cup in their showcases.

further, leave pictures to remember, like that goal against Rotor Volgograd in one of his famous uploaded to finish off a corner, or his famous vomited in the middle of a match after observing a broken leg of a player Coventry City, David Busst. Total 292 Manchester games where the goal to get hold 0 in more than 140, a spectacular record unsurpassed to date. 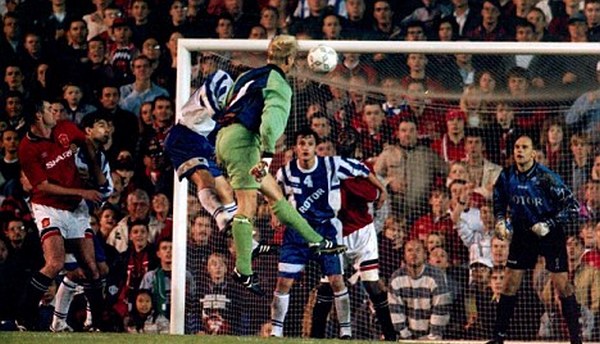 But nevertheless, his great sporting success would not come to the United, but with his selection. He is the player more international caps for his country (129), Euro 92 would give him his greatest joy in Sweden in a pitch. Holiday he learned that Denmark would replace Yugoslavia at the finals of the European. And he did not spare the occasion, Holland and Germany witnessed as a team unprepared but with an exceptional goalkeeper could break all the molds seen so far in football.

In 1999, Schmeichel, you tired of struggling would retire to a second tier team, if it can be considered to Sporting Lisbon. With the Lusitanian would dispute 55 games and get a new league. But nevertheless, his step was sporadic since in 2001 back to England to play for Aston Villa (where you'd get the first goal of a goalkeeper in the Premier), last team prior to step, el Manchester City, where his son was and where he would retire in 2003 to make way for Kasper, Kasper Schmeichel. The saga continues. 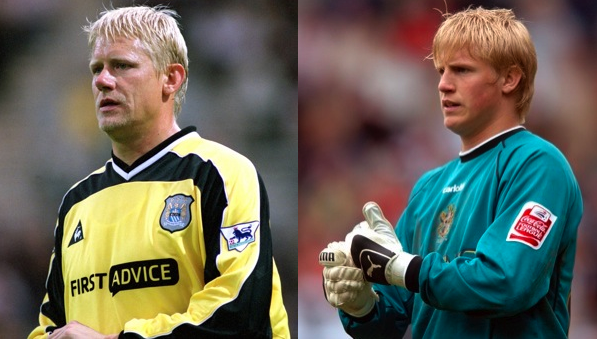