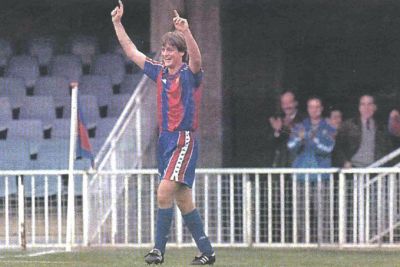 The Thomas Christiansen is one of the most unusual in recent memory in Spanish football. In 1993, He jumped into the fray a young Danish Spanish mother, which made it easier to have dual citizenship. He was a young striker who had not yet turned twenty years and played for Barcelona B, Barca subsidiary, which at that time was the “Dream Team” Johan Cruyff.

In 1993 He had uncovered as a good scorer in the second division with Barcelona B and had left some flashes of future crack which caused him to be noticed from the Danish federation to join your selection. Danish certainly was the direct rival of the Spanish to enter the World USA 1994, classification eventually led Spain after winning the Danes in Seville with goal Hierro. 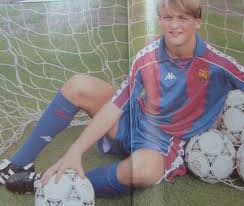 Thomas Crhistiansen excelled in the branch of Barcelona and starred in a historical event.

This interest of Scandinavian selection and the dual nationality of Christiansen, They made an unusual event occurred. The Royal Spanish Football Federation and Javier Clemente, Spanish coach of the time, they decided in fact never seen and possibly not repeated, summon the player to play for the Spanish team and avoid that he could play with the Danes.

You may wonder, Where is the unusual fact?, because the player had not debuted in the Primera Division, nor she had worn the shirt of the first team of Barcelona. He was a player who had poked his head slightly by the Second Division and little else, He had not done anything. The fact raised much expectation.

The truth is that the baggage of Christiansen with Spain was two caps and a goal, in a match against Latvia in qualifying for the American World. Hence his story ended with Spain, era 1993. His career lasted until 2006.

The Spanish-Danish with the shirt of Spain the day he was summoned.

The player despite being international with Spain never entered into the plans of Johan Cruyff who declined to give ball players like his son, George, firecrackers or as diverse as Ekelund, Wistchge or later Korneiev. Players of the less contentious level.

Chrirstiansen was international with Spain and never debuted with the first team shirt of Barcelona, at least in an official match. He wandered on loan from Sporting Gijon, Osasuna and Racing Santander before the Barcelona gave him the passport 1996 without ever having played with them. In the Spanish selection, They had already forgotten him.

After already out of Barcelona, He was in Oviedo and teams like Villarreal but its wake had petered out, as many cases of young players who are overrated and exploited prematurely, before the age of thirty he was a forgotten player and lot.

Tomas Christiansen broke in Bochum and was the top scorer in the Bundesliga.

Then he left to play in Segunda B with Terrasa and the Greek League and when nobody was hard for him, there was another unusual event in his career, signed for Bochum in the Bundesliga and won. Ten years after his debut with Spain was the top scorer Bundelisga, It was in season 2002/03 and marked 21 goals. No one remembered him for selection at that time, football stuff.

Roger Milla, hero by accident
The first Intercontinental Cup history
Mexico was the withdrawal of Spanish players in the 90
Klaus "Create" Urbanczyk, a hero of before
World Brazil 50: The Maracanazo and a semifinalist Spain
Fury was born in Antwerp
Honduras and Salvador staged war football 1969
Kubala and Di Stefano: the tandem could be possible
The party with the most penalties in the history of the Spanish League
Paco Liaño, the best "Zamora" history