Few Spanish players have had so much class as it gave off Diego Tristan, a Seville born in the Algaba 1976. After starting in the ranks of Betis B, in 1998 It was signed by the Mallorca B, where they soon begin to mischief as incredible goals that would make debut in First the 12 September 1999. That first season in the top flight Tristan turned reached truly spectacular finish was as 18 goals in the league championship.

remarkable performance that earned him to sign a pre-contract with Lorenzo Sanz, Real Madrid president for the season 99-00. But nevertheless, the arrival of Florentino Perez canceled the option of signing decanting by the Portuguese Luis Figo. It would be the Deportivo La Coruna, finally the club that would highlight its services and where more throughout his career. With the Galician club would get a League, Spain Supercup, plus a top scorer in the season 2001-2002 which it earned him to be led by Camacho World Japan and Korea.

But above all, participate in the Centenariazo, Cup final where the Depor would defeat Real Madrid in their field. Thus, Madrid was left without celebrate its centenary to his audience, and Tristan, to score a goal, saw avenged their shame with Florentino Perez for not wanting to sign him for whites.

Arrival of 2006 It would entail the progressive decline of Tristan. field problems and penchant for parties and revelries, They propitiated leaving the Galician club to the Italian Livorno. From there Tristan no longer reach levels exquisiteness of old and pass on by West Ham and Cadiz, club that he would retire at the 2011. In October 2013, He suffered a traffic accident in which he fractured two vertebrae.

Definitely, the Andalusian was one of the best strikers of his time but perhaps, your doing off the field was not up to a talent beyond doubt within the same. Another one of those misunderstood footballers but one of the brightest attackers who has given the Spanish football in recent decades. 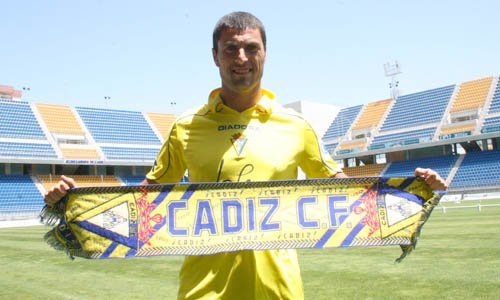 The first Intercontinental Cup history
The party that initiated the Balkan War
Winston Coe, the one-armed archer
The "Dream Team "Johan Cruyff
Thomas Christiansen: an unusual story
Javier de Pedro, one of the best lefties in the history of Spanish football
that mythical "Grande Torino"
The death match, when life is at stake
Holland 74, the "Mechanical orange" which brought the total football
Luciano Re Ceconni, a prank death