Argentina, possibly the selection with the strongest attack

If one sentence could summarize the Argentina that we can find in Brazil it is not be other than the following: great attack, Regular center of the field and poor defense. It may sound exaggerated but this essentially sums up what the Albiceleste have now at hand. In the above, nobody seems to overshadow. Messi, Omen, Rodrigo Palacio, Higuain are players able to be pichichis in a championship of the world with ease. And above, we do not have Tevez, to which Sabella seems to give many chances to enter the final list.

In the middle, The change things. Is Di Maria, Mascherano also, Maxi, Gago but that Argentina no longer so scary. Touch slow in the middle and some more speed on the wings. The problem will be how far these midfielders can generate enough game for above.

The big problem comes however on the defensive. The weakest by far. Otamendi, Zabaleta, Federico Fernández are good players but maybe not to the level that should be required a champion of the world in power. In goal, Romero seems to point to headline in a call where the presence is not expected either Willy Caballero, one of the best goalkeepers in the world.

Of course Crumble the strengths and weaknesses of Argentina requires going a little further. Why are you, will be based largely on what you want Messi. The best player of the moment, with permission from Ronaldo, Brazil has one of its great opportunities to be crowned as one of the best of all time. In his boots he is wondering if his season has been designed by and for the World or whether there started a gradual and worrying decline in its performance. Their performance, It depends on whether we talk about a three-time champion Argentina or another failure of the albiceleste. 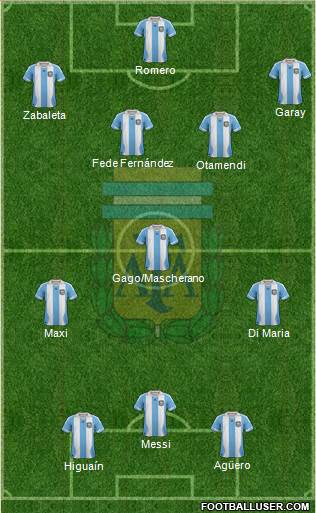 Alejandro Sabella will be responsible for leading the always complicated selection Argentina. Full of Talent, Sabella has already had the first problems. But dealing with Messi, Tévez explain absences or Knight are some of their technical problems in 30 games with the albiceleste has only scored two defeats, two against Brazil in the Classic of the Americas.

Strong personality, He tries to finally give his country the third degree through good play and goals. Most difficult thing when all the press and all fans will be waiting for you to carry it wrong. And in Argentina at the same happens in Spain or Brazil, each follower has inside a selector.

One thought on “Argentina, possibly the selection with the strongest attack”