Cameroon will be the sixth time in its history in the World. It will as always. With a tactical hardware based on some good individuals and huge defensive problems and. Not once the lion is as fierce as it was before. Domable seems more than before, partly because it comes with a much larger block, with less thrust and with many players already back in his career. Starting with Samuel Eto'o, Now Chelsea and flagship of a team that aspires to surpass make a discreet role.

low profile because who writes has already seen too many missteps to think African teams that now are serious. In the case of Cameroon there are several reasons not to believe them. First, the draw. They are boxed in a group where Brazil is clear favorite and Croatia and Mexico, They are slightly higher. The second, because the defense does not hold water everywhere. Slow, They have serious problems tactically. And if that was not enough, the atmosphere in the locker room is not the best. There are players who do not get along and has always been said that to get away, It is required to be attached.

basically, the group will go to Brazil who won Olympic gold in Sydney 2000 with occasional novelty. Between them, of his coach, Volker Finke, a German name but little long experience in football.

– The physical aspect. As always it will be the biggest asset. They are physically superior to many selections and above have the advantage of better coupling to high temperatures which may be in June in Brazil.

– Eto'o. He Webó player and Chelsea are two latches facing door. Both have a goal and proven quality to solve a party. That in World, It is much ground gained.

– Lack of talent. The midfield is working, tireless but lacking in creation. It has enormous problems of development and take control of the party.

– very slow defense. The Chedjou and Nkolou plants are too slow to compete with world-class players as there will be in Brazil. further, tactically also they have many problems.

– bad atmosphere. Until very recently, the presence of Eto'o was not secured by problems Federation. Cameroon always live in wire and that is not the best way to tackle a World. 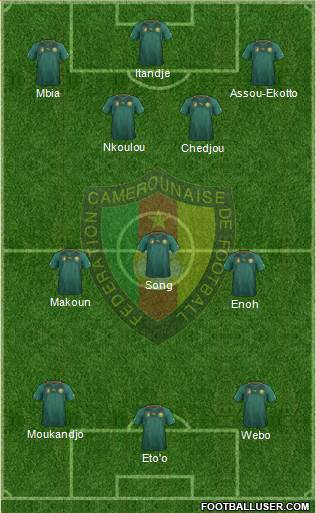 Volker Finke is the man who will have the always difficult task of leading the “Indomitable lions” Brazil's World. Although not well known not forget that this man went 16 years at Freiburg in years 90. His teams have always been characterized by iron discipline and safety ago.

But in the case of Cameroon, It seems difficult to be able to translate those ideals to this group. Unknown performance and result in such a demanding tournament like the World Cup and especially, how it will be able to get along with stars on such a long concentration.