South Korea, supporting actors, but important in the last World

Since the beginning of the era of modern football, this Asian team is one team that is always in the final phase of the World. Never missed an appointment from México'86 and Brazil will be its eighth consecutive participation. Seems unattainable match past successes as the semifinals reached in fantastic that year 2002, where they played hosts with Japan. But ambition and enthusiasm does not lack a generation of footballers in which only one exceeds thirty. A young team with outstanding players contesting up to nine European leagues.

Lately they were used to qualify without too many problems, instead, this time it was not a bed of roses. Iran's always uncomfortable traveling companion, and internal problems meant they were about to miss his finals. Only goal difference with Uzbekistan tipped the balance in favor of Korean. A balance igualadísima, in which a valuable goal difference gave them a direct ticket to Brazil.

His own irregularity, the continuous changes in the system eleven occurred in the last three years that do not reach glimpse at its best. However, Brazil will meet its first anniversary as coach of the team a myth in South Korea. Hong Myung-Bo, possibly more than the great glory of Korean football. 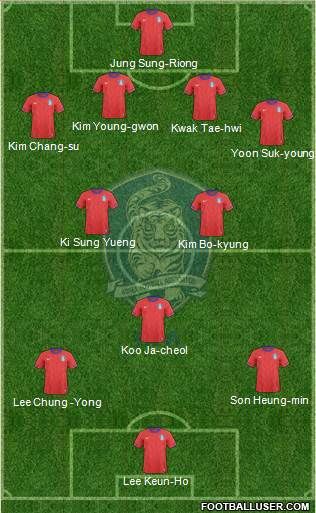 Hong Myung-bo in Brazil will be a year in office as South Korean coach. I took over the team after a period of clear instability on the bench. After the passage of Cho Kwang-Rae and Choi Kang-Hee for office, it seems that finally Hong Myung-bo has settled and the Tigers of Asia, despite his inexperience, They found in her figure what they needed before facing the global showpiece.

As a player he defended up to 136 Sometimes the elastic of his country scoring 9 goals. He acted as libero and enjoyed a great tactical sense. After retiring in Los Angeles Galaxy, MLS, devoted body and soul to the lower echelons of your country. Within the coaching staff of the federation was an assistant in the absolute, U20 and U23 before becoming absolute coach. I enjoy a great sporting fame in his country after what has been achieved in the World Cup in Korea and Japan 2002.

– Bronze medal at the Olympic Games in London 2012.

Alvaro Nunez, from runner-up in the Copa América to taxi driver in Soria