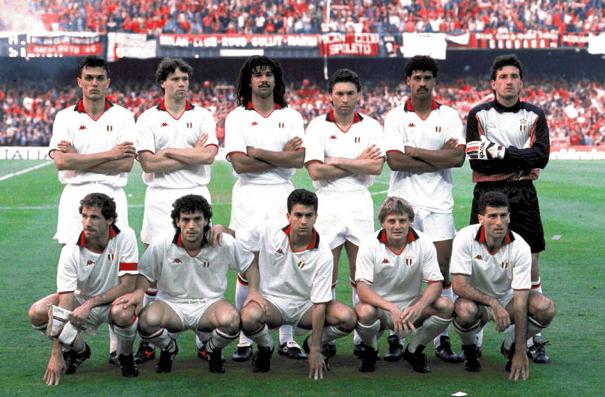 Our section of retro football brings us this time to remember the Milan of Arrigo Sacchi. An unstoppable team in four fantastic years managed to revolutionize the world of football with a system and style of the game itself that led to a lot of records and titles and led him to be considered one of the best teams in football history.

The origin of this great Milan must be found in the arrival of Silvio Berlusconi to the club 20 February 1986. After a period marked by scandals previous gray, bad results (even drops to Serie B) and a poor image, the arrival of “The Cavalliere” the presidency would mark a turning point. Their large investments and their quest to conquer Italy and Europe would end up transforming the structure of AC Milan.

While it is true that his first season 86-87 the head of the entity “Rossoneri” He was going to complete in a very dignified manner, this campaign was going to be where you would find the magic potion to fulfill your wishes. In a tie against Parma, Milan would be surprised by the Parmesan team coached by Arrigo Sacchi then semidesconocido. The image caused by the box Sacchi would be so positive, I surprised by his concept of football, Berlusconi would send the great Arrigo signing for next season. In fact, Legend says that once finished asked who was the bald coach. And once answered the question, answered: I want it.

Sacchi landing hung out with the arrival of several Dutch level: Marco Van Basten, Gullit y Rijkaard, Golden Tulip trident, who came to complement a starting lineup which included the defenses Baresi, Maldini, Tassoti y Costacurta, and Donadoni or Ancelotti means including, besides attacking the level of Daniele Massaro or Virdis. 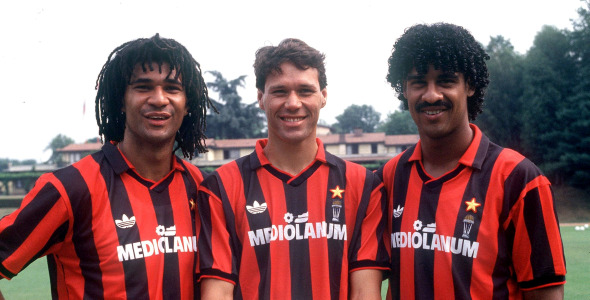 Gullit, Van Basten and Rijkaard marked an era in Milan.

COUPLED the desire to eat and hunger for titles the result was immediate: the Scudetto of the season 87-88 and Supercopa Italian. all, in front of a Naples led by Diego Armando Maradona put things easy.

Despite the tremendous sporting success obtained, The highlight was the way to achieve. With an innovative system, based on a zone defense, occupation of spaces and a forward suffocating pressure, Sacchi had managed to break the traditional Italian catenaccio. But above all, He had managed to change the habit of footballers: traditional training equipment was replaced by double session days with four hours devoted to physical exercises and ball, and four aimed at improving the tactical side.

further, the team was controlled in a sports town, Milanello, where players worked out with weights in the gym and was monitored in detail their food. The question was to live by and for football. Turn it into an obsession. 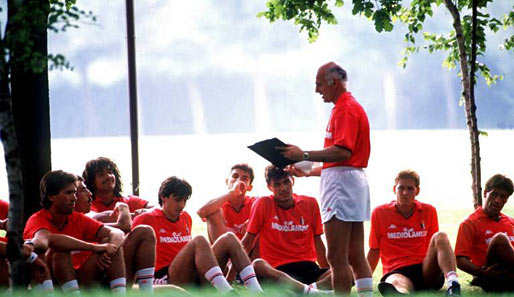 Sacchi was feared by the players for their desire always to improve.

The result of this hard work, the team would win two European Cups in a row. The first in 1989, winning at Camp Nou Steaua Bucharest George Hagi by a convincing 4-0. But the final, what impressed was the spectacular path followed to reach the title, and more particularly, anthological the semifinal against Real Madrid, where the Italians were to endorse a hand to the Quinta del Vulture.

The second, It would also be charged as a victim to Madrid, this time in eighths, further, the team would eliminate quartered at KV Mechelen Belgian, Bayern Munich in the semis, and in the final in Vienna Benfica goal by Rijkaard. The two European Cups were finished off with two European Super Cup against Barcelona and Sampdoria and two Intercontinental against Olimpia of Paraguay. 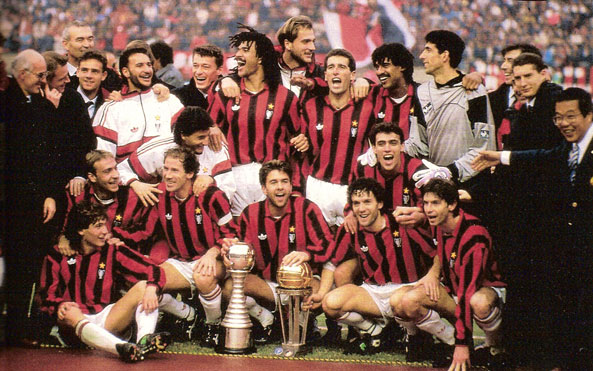 Only Italy, where great Diego Armando Maradona first and a brilliant Sampdoria resisted the push of a team that will be remembered by those images where you could see how all players moved together and simultaneously in the direction of the ball, They rose and fell, not only all together, but remaining at the same distance from each other, without losing more than one meter.

Sacchi finally step down in 1991 to take charge of the selection. His replacement Fabio Capello would get to keep the team in the elite with a season 91-92 great where the team finished undefeated Scudetto. Capello, great coach, He left a successful image, but he could never ignore the role of Sacchi and that fearsome machine efficiency, to emulate then many other teams. 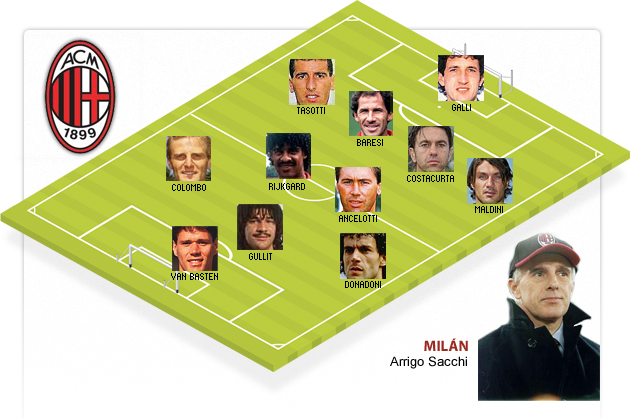 Eleven type of AC Milan of Sacchi was a real equipazo.

João Saldanha was the creator of Brazil 70
The "Superdepor", a classic in Europe
Roger Milla, hero by accident
Diego Tristán, another misunderstood talent
The worst penalty of League history?
Denmark won the European Championship in Sweden 1992 coming as guest
The story taconazo for Guti
Ladislao Kubala, one of the best players ever
Brian Clough, a genius who knew it was
Lubo Penev, Bulgarian who made history in the Spanish League