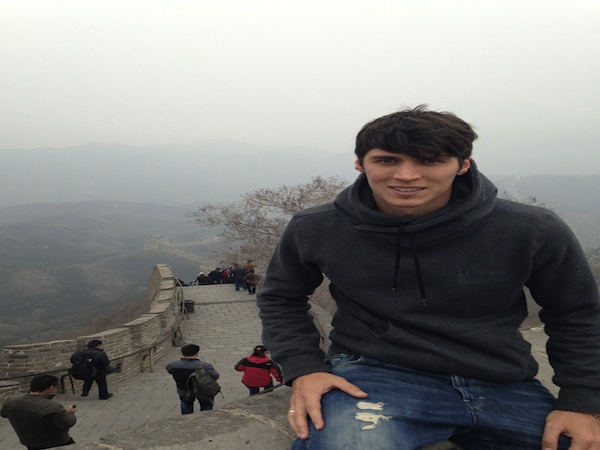 Rafa Jorda Golea in China Super League. At 29 years, Catalan is one of the most outstanding players of his team. The former Numancia, Alicante, Hercules, Benidorm, Peralta and Levante is an adventure in exotic China Super League which is showing all its quality in Guizhou Renhe FC. Today in "Hanged", we go to GUIYANG.

Colgados: Hi Rafa, first congratulate you on your successful career in China, You take nearly two years. What live there?

Good, The first to thank Colgados and all / as your readers, It is a pleasure to tell you a little of my life in China. How to live as a footballer here contrasts enough with the way of living in Spain.

Here we live the whole team in a hotel, throughout the year. It's strange, but I've gotten used to it. And good, we can not complain, we are in a very nice hotel with people who are watching us all day.

C: Guiyang is a city of three million people in southern China What can you do in Guiyang? What does Rafa Jorda when not playing football?

Good, Guiyang is a small town for what is China. A temperature is ideal for training and playing, in summer is not excessive heat in winter and winter ... we are not here, Because there is no competition!.

C: China and Spain are two totally different cultures What differences have you seen between the Chinese lifestyle and Spanish style?

I try to enjoy every moment without thinking I would be doing at that time in Spain. In the end my country, my traditions, my people, all that throws a lot, but I'll have plenty of time to enjoy mine. Now it's done all this, their mealtimes, hours to train, the language, its people ...

C: How do you take Mandarin?

C: Vives in which aspiring say is the 1st world power, a country that is opening up to the world What do you think of China as a foreigner?

Good, as you say is a country that is opening and gradually seem to be more foreigners come to this country that creates so curious. Shanghai and Beijing have taken the first step and much western seen in these two cities.

C: When you come to China you met Nano, later came Rubén Suárez, I suppose it would help your adaptation How did you live those early days?

The first days are great, all new, new life, and Nano who I accompanied me throughout, After this phase of euphoria the truth is that you paste a little letdown, many km away, your people, language, your habits ... but with the passage of time, one becomes all.

C: Playing with Levante in First, Why did you decide to migrate to China?

Good, this is something I have explained several times. I ended contract at the end of season, also left ankle injury that took me 4 months without turning recover. When I feel better, I could play some minutes this come from China, I certainly could not let it go. And my sporting situation at that time helped make this decision. Definitely, I think I was right full.

Catalan is one of the best strikers in the Chinese Championship.

C: On the Chinese fans, Are the stadiums are filled?, How is the hobby of Guizhou Renhe?

They are rarely filled because almost all Olympic stadiums are and fits many people in them, but if fans. The Guiyang if something is you can point out how grateful we are, encourage the love, be on top of the players and without stopping to look at the result. The truth that gives pleasure to play in front of us.

C: In your first year you were one of the feelings of the Chinese championship, hit one out pass for the Asian Champions, in your second year you have fallen at the gates of returning to this competition. What do you expect from this new season?

And, Last year we got to direct and play Champions Cup final, that we lost against the best team in Asia. Marcelo Lippi's Guangzhou. This year we finished 4th and remains to be seen if we will go to Guangzhou Champions since been a champion of Champions and that may help to put a Chinese team more. further, the fact that we are again Cup finalists is given.

C: Guangzhou Evergrande is the best team in China, trained by Marcelo Lippi, was your executioner in the Cup final in 2012, this year has won League and Champions, is the team to beat in Asia and in China. What is special about this team?

The coach is what draws more attention. But he has class players Conca (the highest paid player in Asia), Lucas Barrios who was until midseason, Elquenson and the entire base of the Chinese team. They are a very good team.

C: On a personal level you have marked 18 goals in 56 Super League matches in China. What do you expect of the next season?, Do you brand a number of goals?

Yeah sure, I framework in order to continue to improve my numbers of these two seasons. 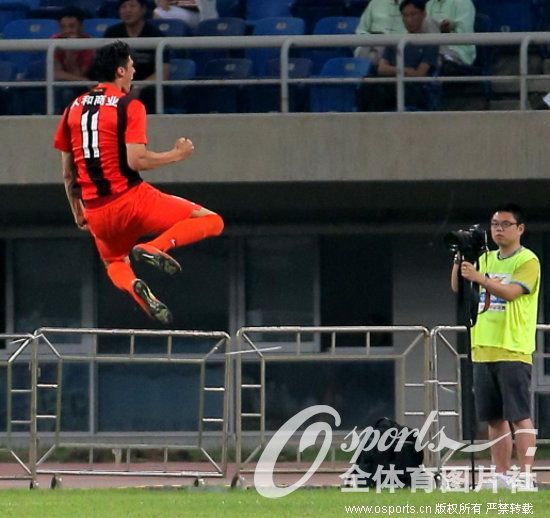 China has surrendered to goals from Rafa Jorda.

C: What differences do you see between Chinese football and Spanish football?

Many, But we are talking about one of the best leagues in the world and one that is in growth phase. In Spain are the best.

C: China will not be at the World Cup in Brazil despite the growth of Chinese football, even until June 2013 Jose Antonio Camacho was there, without much success. What room for improvement is there football?, Do you think we will see China in a World Cup short-medium term?

Hopefully soon we can see in some world, I wish them well and I also share a dressing room with some of the players of the national team.

Camacho I can tell you did a great job and his players were very happy with it. Work coaches do not always rewarded and less if we talk about a coach who is much more difficult. As a person he is a 10, him and his coaching staff wish them all the luck in the world. Personally my Nano and helped us a lot in our first year.

C: Apart from Rafa Jorda, Nano,... Could you tell us three or four players to consider in Chinese football? Any future crack?

Well highlight to Elkenson, striker Guangzhou Evergrande. It is Brazilian and has gotten many goals this year. Certainly you have to play football in Europe. I think we will talk soon about this guy.

C: With 29 years are a veteran, I guess that will keep many memories. What has been your best and worst experience throughout your career?

My worst experience without any doubt, my pubis injury. Something that struck me in sports and personally. But all exits. My best, my promotions with Numancia and Levante , and the Cup final I played last year that although we lost, football gives second chances and playing it back this year.

C: Rafa Levante lived a nice stage, to rise included, in fact you marked as important goals that gave the three points against Villarreal B and Celta de Vigo. How do you see your team from a distance?

Well I keep them much, This club is special. Must be inside to know what I'm talking about. And if not talk for a while with the great Paco Fenellosa,then you will understand a little of what I speak ... I've spent 3 spectacular seasons there, with rise and stay included. And a locker room that you could not say a bad word.

C: With the Numancia, team which debuted and get your first ascent. What do you keep memories of Soria?

Soria I keep very good memories, Soria reach 18 añitos just turned and I went with 24. I can say I learned a lot there, I cared a lot and still keep great friends. The last ascent truth is a nice memory, In my last year, because although I could be renewed for three more seasons, that year I decided to leave Soria. He did not want to be the guy who came from the quarry.

C: We have received many messages from fans asking Numancia and Levante you did an interview, It looks like you're well-liked in Valencia and Soria. Do you have any message for the fans of these teams?

To thank all, It is appreciated that still remain outstanding. It is an honor for me to have dress shirts these teams. But I do not forget the Damm, where I grew up as a footballer and as a person, Valencia CF who opened the door when I took the step of leaving home, CM Peralta or Benidorm CD that gave me the opportunity to play on loan at Segunda B and they treated me incredibly well, or CF Hercules Alicante CF and they certainly are two clubs that I keep a great affection and I am left with the thorn of not having responded in the same way as my pubis injury prevented me. Thank never hurts more and certainly, I have no complaints about any hobbies or clubs for those who have spent, all I have learned and I have taken dramatic experiences.

Numancia debuted at the elite and lived his first ascent.

C: Who was your best coach or you remember most fondly?

Good, I remember with great fondness Gonzalo Arconada to. In professional football is the first person who showed me their trust. Anoeta and promotion jugándonos me into the 11 and I said: “There you have Rafiki, grab it”. those gestures are appreciated and as time passes more. I also remember with great fondness my coach in the CM Peralta, Emilio Remirez. In a word I'll summarize, ¡Crack!. He who knows knows what I'm talking about.

Well in the Catalan team I was lucky to match players recognized worldwide, Xavi, Puyol and Valdes, but I've shared a dressing room I prefer 2, Farinós and Txomin Nagore . Both are players in midfield and certainly training with them you learn a lot. Two phenomena in sports and personally, and that I have caught them both older ... haha

C: We cracking of sports programs in Spain on our website Colgados, only speak of Real Madrid and FC Barcelona. What do you think of Spanish sports journalism? Do you see any program?

Apart from reading the press I do not hear much more. But if it is true and it is nothing new that is too steep of the two great. I do not think that is good either for them, coming out in the press over trifles, or for the other teams that do important things and just take one minute information.

C: Do you read Colgados? What do you think about our website?

C: Who is going running out for you the best player in football history? And the best Spanish history?

Good, I have not been lucky enough to see Pele or Maradona or Di Stefano or, but luckily I could see and I still see Leo Messi, certainly I prefer the latter. I guess you will have to do with my age. But I find something out of the ordinary.

The best Spanish history ... Raul?, ¿Xavi?, ¿ Iniesta?. Lots to choose from, You make it complicated..

C: By last, we want to get wet and give us forecasts to win the league, Champions, the World Cup and the Super League China.

Super Liga China: Guangzhou Evergrande, unfortunately for us, It is a step above the rest

Thank you very much Rafa, We hope you have good luck in China and above all in good health, injuries respect you and make a great season in the Guizhou Renhe. Our best wishes from "Hanged".