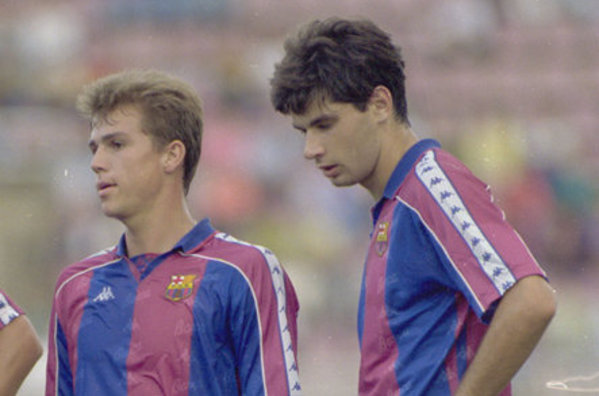 Ronnie Ekelund was one of those rare players who came to Barcelona under the mandate of Cruyff in the early 90. Dutch coach, He combined a fresh style of football at the time and great success with the less rare signings. A) Yes, with world-class players like Stoichkov, Romario, Laudrup o Koeman, She came a long list of players like Sanchez Jara, Korneiev, Vucevic, Witschge o Ronnie Ekelund. On the latter we speak today in Colgados.

This Danish-born player 1972, He reached the ranks of Barcelona in the summer of 1992 after participating in the Olympic national team in the Olympics held in Barcelona precisely that year. This must draw the attention of a scout club staff who decided to make his move. Unfortunately for him, when Ekelund came to Barcelona, the Bosman law did not exist and any European player was considered alien whose quota, He was limited to 4 by workforce, 3 by calling. This caused Ekelund disputed that season in the subsidiary culé.

But nevertheless, He even made the preseason summer 93 with the first team at Barcelona although its contribution to the Dream Team of Cruyff was just over half an hour in a game played in Santander which came to replace the legendary José Mari Bakero. The rest of his playing the legendary team of Cruyff had to live as a spectator.

Then he went to Southampton which tells a story that ended after a talk between the then coach of the English team and Cruyff in a hotel where both teams agreed, Ekelund ended up being hired by a 100 million pesetas giving so ended a testimonial way through the home Barca. England nor he blunted and his career never became what appeared. Another player who went unnoticed by the League and a giant of world football like Barcelona but can at least say that he was there.

-The worst signings in the history of Barcelona

-Five players who went to stars and ended estrellados

-Five players who were going to star starry II ended