Holland, that the fourth time lucky

Holland alongside Uruguay represents a rare exception in the world of football. A small country of just 16 million people in the habit of players out of nowhere and turn them into glittering stars. A selection until years 70 just painted anything on the international scene and currently owns no less than three world subchampionships. That is the description of a team that goes to Brazil with doubts.

With doubt because Holland has good players, talent to spare to reach any instance, but also huge hesitations and above all, one full draw pump mined. Middle of the field up few teams can present the letter to have Robben, Huntelaar, Van Persie, Sneijder o Van der Vaart. Creation, overflow, goal, what every country dreams for the World Cup has Netherlands. But also, defensive frailties in an experimental line will address mostly the first great international experience.

Knowing that Louis Van Gaal is technical no doubt that bet on the Netherlands 4-3-3 and the game ball as pattern. They want the ball and go to parties. But framed in such a tough group as B, God only knows where will the shots. Spain, Chile and Australia require the best versions of tulips, if that little could be crossed with Brazil in second round, tough opponent, although inaccessible, As they demonstrated four years ago in South Africa.

The story owes over and who knows if it is in South America where “orange” Saldan your outstanding account. If it were so, surely everyone would rejoice. Because after all, we are all Holland. 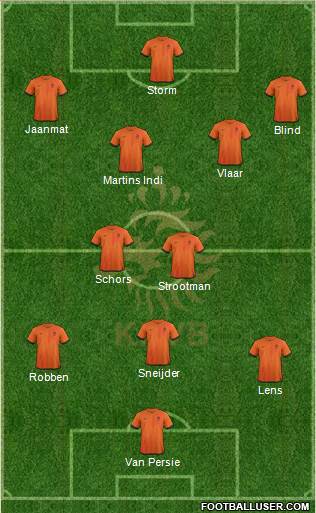 Few presentations are needed the next character. He has directed the best teams in the world and always leaving their mark. His methods are not the most orthodox but effective. True to his 4-3-3 with him will die and he will leave his taste for good football. yes, for it will lead straight to his players well. That's Louis Van Gaal, in charge of finding the Netherlands win their first World, 40 years after his first final.

Of course Van Gaal will not be alone. For such a difficult mission will beside Patrick Kluivert. Praetorian Guard for a man who has always been surrounded by his people, has kept some distance with the press, something vital in long championships concentrations are as World. Precisely, harmonize the group and provide them with good atmosphere will be one of the challenges.