The Battle of Santiago was the toughest match ever

Hanging by the futbol us about one of the toughest games are remembered in football history: Chile-Italy a 2 June 1962 belonging to the Chilean World Cup and popularly known as the Battle of Santiago. Hits, fights, abuse, Cracking previous statements and much more in a game that was more than that.

To know exactly what happened in those endless 90 minutes say that Chile had been chosen to host the World 62 despite having poor infrastructure and possibilities, especially considering the great earthquake Valdivieso 1960. all, It made it the subject of criticism from other countries, especially Europeans, they saw as a developing country would 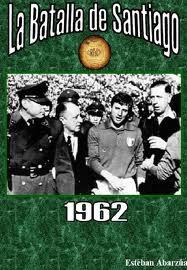 organizing an event of the first level.

The second day of the group had to face Chilean and Italian. A key match for both that was used by the Italian press critical to pour into the country and the city where the party was to be held, Santiago. Were particularly intense criticism from Antonio Ghirelli and Corrado Pizzinelli, who in an article called “Santiago, the end of the world: The infinite sadness of the Chilean capital.” They are throwing poisoned darts toward the South American country:

“Since I'm in Chile I have a curious feeling of carrying the world on my shoulders. You will feel like over the sadness of the people, and this causes a curious malaise is compounded by the huge jumps in temperature.[…]The blood becomes clumsy and seems to be lacking in the veins, and after spending some time in Chile one feels strange to everything and everyone. Remoteness virus most neglected, loneliest, more anonymous, he gets into the minds of all and I think it will affect the mood of athletes.

In vain Chilean, to console the Italian, They say that James seems to Turin[…]And this perhaps to try to forget the reality of this capital, which it is the sad symbol of one of the underdeveloped countries of the world and afflicted by all possible evils: malnutrition, prostitution, illiteracy, alcoholism, misery… Under these aspects Chile is terrible suffering and its expression Santiago, so sorrowful that it loses its characteristics of anonymous city”.

How could it be otherwise, Chilean press said (Santiago compared with Turin and southern Italy) and he heated the spirits of the fans, very angry because many Italians, also, Chilean women described as ugly. It was like this, in these circumstances as it came to game time, with Santiago National Stadium packed to the rafters who received the Italian players with whistles and whistles, despite the detail of Europeans wear white carnations to calm down the public.

The match, obviously was a war. Italians already hard, not shriveled and the 12 Seconds committed their first offense. Seven minutes, Giorgio Ferrini was sent off for a ticket to Honorino Landa, which caused the first brawl between several players by refusing the player to leave the field transalpino. Finally, They had to be security forces (Chilean Carabineros) who take him out by force, While 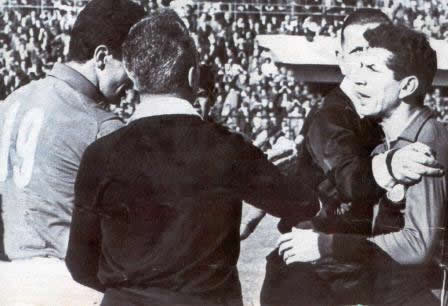 The referee argued with photographers by the proximity of these the field.

Ken Aston the referee did not have the same criteria when Landa himself made an entry into the jaw sanginaria Mario David, He is sparking criticism from Italian players. The match, Meanwhile, passed between kicks, punches and constant aggressions.

But the biggest thing would come the minute 38 the first time, when local Leonel Sánchez burst down the left side of the field being marked by David, that brought down the floor Leonel.

While Chile was on the floor, Mario David hit him repeatedly prompting Leonel Sanchez (son of Chilean ex-boxing champion Juan Sanchez) he got up and propinara a blow with his left fist David. curiously, neither action was sanctioned by Aston, more than English, it seemed to Swedish. 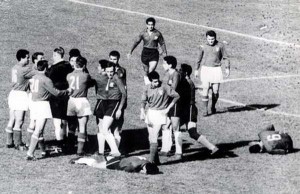 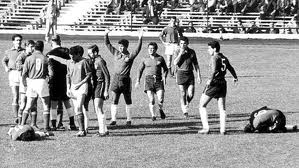 If he was to be punished instead the spectacular kick Mario David's neck Leonel Sánchez few minutes later, which he ended with the Italian in the locker room after being sent off for Aston.

Only the break seemed to dwindle the minds of both teams, which he took Chile (with numerical superiority of two more men) to mark two goals by Jaime Ramirez mediating the minute 74 and Jorge Toro 88. all, with the delirium of amateurs who had taken fulfilled revenge of the Italian reviews.

The outcome of the game led to strong criticism for his role Aston's home, what the English replied that “It was not refereeing a soccer match, but he was acting like a judge in a military conflict” . However, Aston would not know why no meeting over the World. 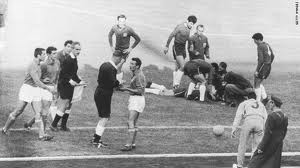 Fouilloux, Chilean, He sprained… Falling on a journalist! he would miss the rest of the world for this injury.

The only positive the meeting would come years later, when Leonel Sanchez signed for AC Milan and shared a dressing room with Mario David. There they forgot old braids and became great friends.

Fortunately the match was only broadcast on BBC English, which nevertheless in their previous and notice what would happen with a phrase for history commentator David Coleman: “Good afternoon. The game you are about to witness is the stupidest football exhibition, frightening, unpleasant and shameful, possibly, in the history of this sport”.

Other chains merely provide a summary of what happened. Best, because it was to forget.

Newcastle-Tottenham stops after a fan suffers a cardiac arrest

Manchester United caught a plane for a flight of 10 minutes

Raphinha, the beast that breaks it in the Premier and in Brazil

The history of the Copa Libertadores, the most important tournament in South America