The armadillo chosen as the official mascot of the World Cup in Brazil 2014 was presented in a favela in Rio de Janeiro with the promise of turning the biggest football party into an event for all Brazilians.

A smiling armadillo with its head and back covered in a shell with blue hexagons, pants and green eyes, yellow leather and white jersey with the legend ‘2014 FIFA World Cup Brazil’ He made his first official appearance on Monday.

El ‘tatú-bola’, as the species of armadillo that closes on itself and turns into a ball when threatened is known in Brazil, doesn't have a name yet, which will be chosen at the end of November after a popular vote online. the name of the ball, which will be called Brazuca, was also chosen this way. 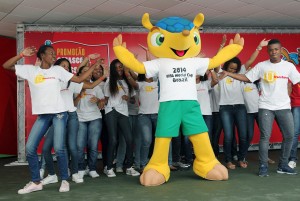 The presentation of the mascot took place in the Morro dos Macacos favela, in the Vila Isabel neighborhood of Rio de Janeiro, to show the intention of the organizers of “hold an inclusive World Cup”.

the armadillo danced “funk”, the electronic music with a catchy and forceful rhythm that most identifies with the communities that live in the favelas of Rio de Janeiro, accompanied by a score of schoolboys from the neighborhood.

A 3D cartoon commercial for national television was also released during the event., where it is promoted to the vote of the name of the mascot. South Africa's mascot 2010 fue Zakumi, a green-maned leopard.