Nigerian international player Obafemi Martins (Lagos, Nigeria, 28 October 1984) signed by Levante for the next two seasons plus an optional depending on their performance. Martins has played the last season in the Russian Rubin Kazan, with whom you terminated contract the past 31 of August, so you can be enrolled in the LFP. The player, comes free to Levante, to place him in the 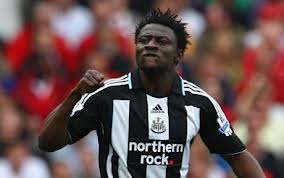 highest step of the salary cap for the granota workforce.

International with Nigeria and World Cup in South Africa 2010, Martins, has played in clubs like Inter Milan, Newcastle, Birmingham Wolfsburg, apart from the aforementioned Rubin Kazan. The player will arrive today on 20 h in the afternoon at Valencia airport and will possibly be presented next week as a new Levante player. Granota club, thus closes his desired signing, two months after chasing him and after a long soap opera. Granota club, thus closes your template with the cherry that you expected, Manolo Salvador, the third ace of the sleeve followed after the signings of Caicedo in 2010 and from Kone in 2011, both with outstanding results.