Pepe and Donkey Kong have a very familiar smile.

Cristian Karembeu has a cousin on the planet Predator because it seems obvious kinship. 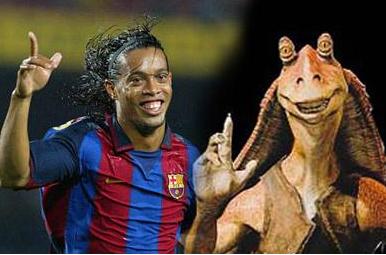 It is rumored that Ronaldinho and Jar Jar Binks were separated at birth.

Pepe and Donkey Kong have a very familiar smile.

Argentina always had a reasonable resemblance to the quirky singer.

Dani Alves and the villain of the gnomes

We do not know Dani Alves has something against gnomes sympathetic as his “another self”, Troll.

Goalkeepers who just contract in June
Uruguay face the possibility of another "Maracanazo"
When Manchester City was the ugly duckling of the city
Clashes Spain-Brazil: all of its history
The three worst goalkeepers in the history of Hercules Alicante
The ugliest shirts football history (I)
Cristiano Ronaldo, Never have so many goals in the league so few titles were worth
Matthias Sindelar, the Mozart of football and the best Austrian footballer of all time
Five of the best winter signings in the history of the League
Some of the most eccentric goalkeepers in history