The shin guards of the professionals

On this occasion we want to introduce you to the company that manufactures shin guards for professional players from various international leagues. Its CARBONPLUS, dedicated exclusively to the manufacture of carbon fiber shin guards for soccer and futsal. Settled in Barcelona, since 2012, they make the best custom shin guards handcrafted.

Carbon fiber is a material with very particular characteristics, is 4 times stronger than steel but with the weight of a feather. For more than 40 years old it is used in all professional sports to increase the resistance of materials.

Among the clearest examples we can find are the chassis of a Formula One, a racket or a bicycle among others. A scientific study in 2014 “The Effectiveness of Shin Guards Used by Football Players”Did stress and impact tests with plastic shin guards Y carbon fiber shin guards concluding that the carbon shin guards were half as thick, they reduced the impact a 300% more than plastic shin guards and that the strain curve was much later. 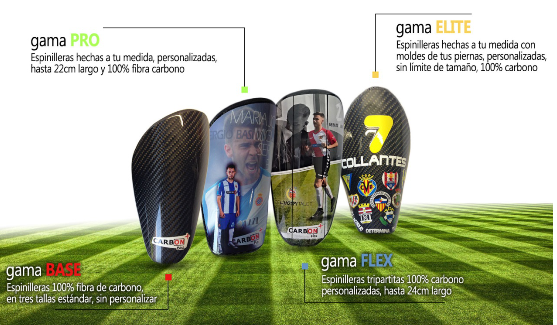 We have been able to speak with Albert Giralt, Carbonplus director and tells us the following:

“We start the walks by 2012 when i was studying at university. I was already a physical therapist and worked in several teams of 3rd or 2nd B to pay for my second podiatry career. So it came a little rolling, During the trips with the team I had a lot of time to think and seeing the need that my players had to protect themselves I tried to help. I did a lot of tests to get lighter shin guards, smaller but above all they were more comfortable and stronger. In the end, after many tests, carbon fiber turned out to be the most suitable material.

The knowledge I acquired in the manufacture of insoles and custom prosthetics did the rest.. To this day I am still amazed with a detail that I show to all my clients or acquaintances. All our carbon fiber shin guards they are so light that if you pull them from the height of our head you can see how they glide when falling. They are very light and in turn capable of withstanding impact of more than 1.000 Newtons and absorb 975N, you only receive 25N.

To all this we add added value, we customize them. We have a designer who does the client sketches, you can imagine: Photos, banderas, text, first name, dorsal, various images, tattoos, etc. Nowadays, everything is customizable and where people want to buy unique things, personalization is one more point in their favor.. The good thing about our company is that we manufacture shin guards from scratch: we can make the size, shape and thickness that the client wants. ”

After talking with Albert for a while, he discovers that his vocation is health, he's not an entrepreneur. The clear example is in the prices. When he started there was hardly 2 workshops that made carbon shin guards in Spain and the prices were approximately € 300. So being able to adjust prices to offer the same shin guards that professionals use for less than € 70 seems to us, how much less, respectable.