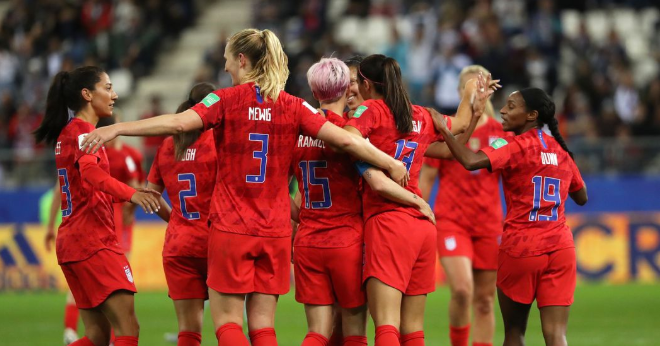 USA is the top favorite to win the World Cup in France 2019. PHOTO: Aztec Sports

United States is the favorite to win the World Cup in France 2019. US players, defend the title of champion in the World Cup being played on French soil, as they managed to win the cup in the last championship played in Canada, in 2015. Especially after the two exhibitions against Thailand (13-0) and Chile (3-0).

It is true that both teams, Thai and Chilean, They are far from the best in the tournament and of course walk light years ahead of other big favorite as Germany or Japan, but American girls have shown a wide variety of resources in the two games where they have been rotations and the team has not suffered. players like Alex Morgan Carli Lloyd and aim to be among the top scorers of the tournament.

The selection runs Jill Ellis came to France World Cup 2019 with all the confidence in the world in its possibilities especially, after winning their qualifying zone with overwhelming authority over its rivals. He won all matches, framework 18 goals and not conceded any stage throughout both so they ended up unbeaten.

Japan, Germany, England, France and Brazil are the teams that started with the US to be the champions of this France World Cup 2019. Nipponese who won in 2011 his first World, already in the second round of the tournament as Germany, England and France. Brazil, which has Marta Vieira, He has found strong opposition to Italy and Australia in their group.

Either way, Now begins the good of this France World Cup 2019, a good time to make your bets on who will be the team that wins this Women's World Cup, if they are some of these favorite selections or if instead there will be some surprises. For it, it is best to try to find the best Apuestas-bonos.com to bet on this exciting women's football tournament is giving us.

AC Milan could be banned from European competitions
Girona-Barcelona in Miami is in the air
Isco presented as a Real Madrid player: Is it really antimadridista?
Manchester City 2-Manchester United 3: Rooney and Van Persie make the difference
Ecuadorian international striker "Mutt" Benitez dies at 27 years
Darko Kovacevic wounded after being shot at his home in Athens
Follow the closing of summer transfer market 2019-20
Menezes sacked as Brazil coach
The premiere of the new San Mames: the best pictures
Walter Pandiani live a second youth in Villarreal