The tension between the two states was highest at the time. A minority of landowners controlled the lands of El Salvador, which caused a constant migration of Salvadorans to Honduras in search of a better life. But nevertheless, an agrarian reform in Honduras in early 1969 caused the expropriation and expulsion of the majority of Salvadorans ( who had worked there for several generations). This escalation of tension was used by the governments of both countries to direct the attention of their populations out, instead of internal political conflicts in each country. 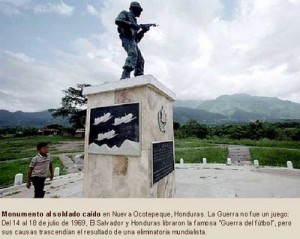 And in that context, football would play an essential role. Two teams facing each other, looking for a pass to a world that would settle a tie dog face. The first qualifying match played in Tegucigalpa end with the victory of Honduras, in a match full of controversy, because the next day, Salvadoran newspapers collected as thousands of Hondurans had spent the night camped in front of the hotel and concentration of the selection of El Salvador armed with pans and chanting to interrupt his rest. further, players from El Salvador accused the hotel itself intoxicated if any premeditation. 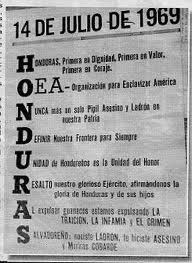 Just one week later, Salvadoran Flor Blanca Stadium was the place chosen by a country clamoring vengeance. The night before the mob had ordered to return the currency to the hotel from the Honduran National Team. The 3-0 end for El Salvador with two goals from Mon Martinez left the resolution of the tie in the hands of a neutral scenario as the Azteca Stadium in Mexico City.

During those weeks the media of both countries were responsible for seasoning sauce conflict. Salvador from the legend of a sinister spread, Colonel Martinez nicknamed "The jackal Olancho" whose men kidnapped and raped Salvadorans through the streets of Honduras.

Thus, They were proliferating the famous litanies, burlesque and bellicose songs from both sets of fans before the match. A breeding ground for more than ideal for what later would become one of the biggest sporting disasters in Central America. 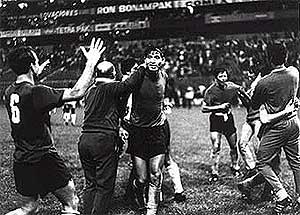 Finally, the 27 June meeting that ended El Salvador's victory was disputed by 3-2 in overtime thanks to a goal from Pipo Rodriguez before the outbreak of joy of thousands of Salvadorans. But nevertheless, that joy contrasted with television images, which she began to show thousands of Salvadorans expelled from Honduras sadly crossing the border bridge of the river Goascorán in response to the defeat of his selection.

Even today no one knows for sure how much of propaganda and manipulation there was in those images. What if it is true, It is that this series was the perfect match to burn a trail of gasoline made with social problems and rivalries, political and even commercial. In fact, two weeks later (the 14 of July), Salvadoran air force attacked Honduras and darkness hung in the streets of the country. 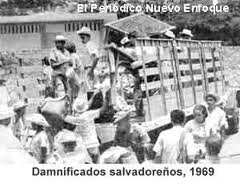 One thought on “Honduras and Salvador staged war football 1969”